Andy Wheeler reports: Whilst everyone else was in Sutton park running in the relays, I was down in London at the new Olympic Park for the ‘once in a lifetime’ National Lottery 5m race. 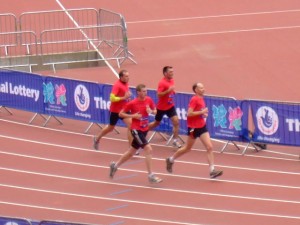 Entry to the race was by ballot back in November; 43,000 entered for 5,000 places. Thanks to Mark Lynock to putting me onto the idea (sorry you didn’t get a place). The most time consuming part of the day was the 1 ½hrs it took to get through the airport style security to gain access to the Olympic site.

Standing in the queue for so long  did give us the chance to chat to other like minded runners about this and other events. I even met someone who works with Rob Andrews at the University, what a small world it is! You were allowed to bring 2 guests in with you, so my son and wife came with me. After finding some seats in the stadium so they could get a good view of the finish, I went off to warm up.

There were 5 colour coded groups for the start (mine was red).  As always I was late getting into the start box: there were no loos near the start and I spent too long warming up: so it meant that I was right at the back of the start box of 1000 runners.  After a warm up lead by a fitness instructor on a stage the race was set off by Princess Beatrice.

The route took us around the Olympic Park and each of the stadia, slightly tortuous though with lots of twists and turns around half built roads and other bits of infrastructure.  I suppose it wouldn’t have seemed too bad if only I didn’t have to overtake so many people (750 in total as I finished 201st.). Why is it, you always find people walking after 200m who managed to get near the start!

Not knowing anyone else who was running apart from Aine from BVH, I was surprised to pass an ex flatmate Mike from 20 yrs ago; it is difficult to recognise people though when everyone is wearing the same red t-shirt.

The final section was through the service tunnel under the stadium to `chariots of fire’ then out into the open and a 1 lap of the 400m track.  After picking up a goody bag I found my way back to my seat to meet Cath and James.  My time was 32:20. An ok time but then I didn’t push too hard and preferred to see the scenery of the park. Aine Garvey finished in 43:45.

It was definitely a good afternoon out and nice to see the Olympic stadium.