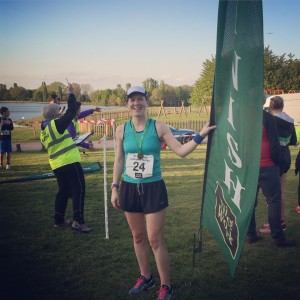 Stacey Marston Reports: For the last couple of months I’ve been working away from home in Nottinghamshire a few days each week so when I saw this race advertised I thought it would be a good way to pass one of the evenings and test myself over 5k ahead of some more focussed speed-work. I seem to have done reasonably well at evening races in the past and after getting within 15 seconds of a PB at Saturday’s parkrun I thought there might be a chance of sneaking one here, especially as the profile seemed to be fairly flat being around the main lake at Colwick Park.

It was only £8 to enter online and there was the promise of a medal too. I arrived in plenty of time for a warm-up around the park before the 7pm start time. Having entered relatively late but being given number 24 I figured it would be a small field, even with a few people signing up on the night. The weather was really lovely; sunny and warm but not too warm and just a bit of a breeze. It was just as well because the organisers were set up outdoors; this was a pretty basic race with no changing facilities, cloakroom etc. but I quite like that, it’s a bit like the early parkrun days – just turn up and run!

Looking around there was a nice mix of club runners and families and friends and I got chatting to a few other people, some of whom had raced in the series before. We headed to the start and the race organiser announced that the start of the series was also the official start of summer; it certainly felt like a summer’s evening. I was glad I’d thought to take the insect repellent as otherwise I’d have been dinner for the midges.

We set off clockwise around the lake, following the interior road to begin with before turning onto the path around the lake, through the trees. Predominately tarmac paths, with the odd bit of trail but no mud; and, as promised, the profile was pretty flat, with just one short incline.

I set off at a decent pace, which I hoped to maintain, but with a small field the runners soon spread out. After the first half a mile or so there was a lady a few feet ahead and I tried to keep the distance consistent as we ran the first of two laps. The park was a great setting, similar to Arrow Valley in Redditch for a more local comparison, but also running alongside the River Trent.

My first lap was good and I was on target for a PB. Two men passed me towards the end of the lap but my target lady hadn’t increased the gap and I pressed on. When I reached the end of mile two though I was 20 seconds down on the first mile and I couldn’t understand what had happened. I tried to pick the pace back up but I was tiring and target lady started to stretch the gap out. The last kilometre seemed to take an age and I was hanging on, willing the finish line to come into view. I glanced at my watch and was relieved to see I’d be clearly under 25 minutes, but my legs and my maths told me the possible PB was gone.

I crossed the line and took happy hold of my medal; another one for the collection! I caught my breath and got talking to a couple from a local running club over the fig rolls and Jaffa cakes (yes, really!) and we watched as the other runners came in. The results were soon processed and presentations made to the first three ladies and gents and in the age categories, including a junior prize (“running socks for you and a bottle of wine for your Mum!”) The lady I had been chatting to won her category and commented that the odds of winning something we’re certainly better than in most races.

The results revealed that “target lady” had a much better second half than I did and finished 30 seconds ahead of my 24:41 time (10 seconds off my PB). She was also awarded the F V35 prize (the first F V35 was in the top 3). Must try harder if I want a bottle of wine (no finer incentive surely?)

Overall I enjoyed the race and will definitely try to get to at least one of the others in the series and seek that elusive PB. The organisers also run the Leicester series so I may even venture there if it works in with a drive home.