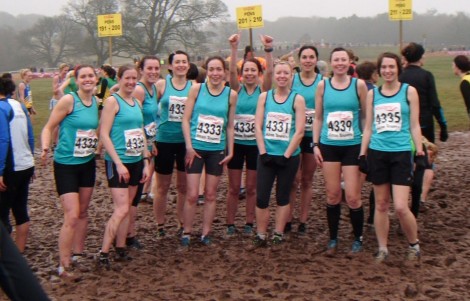 Sarah Rock reports: I must admit we were all a tad disappointed when Steve pulled up, not in a tacky old yellow minibus, but a brand spanking new shiny white limousine (well, all but the limousine were true!).

All 16 BvH runners piled on, with those of us who had seen the weather forecast for constant rain all day, thinking that this bus wasn’t going to be as clean when we gave it back. However, as we neared Stoke, the rain stopped and Steve commented that it was ‘brightening up’.

This statement seemed rather ambitious as we started to climb the hilly country lanes towards Alton Towers and there was a cry of surprise from the whole bus as a car came towards us, covered in SNOW!!!!

My own thoughts on seeing this was that the ground might have been hardened by the snow – but oh no, on arriving at the car park, we were confronted with what can only be described as a quagmire of mud. I have only been to one music festival in my life, in rainy Scotland many years ago, and this was worse – only the photos give an indication of what we encountered.

As hardened and experienced cross country runners, we have encountered many conditions, and we are no strangers to mud – it is what you expect in a race – but not in the registration/toilet area. It was so muddy it even dampened the ladies’ enthusiasm for the retail opportunities that are always presented at the National Champs (having said that we did purchase a few hoodies to say we’d been there!).

We then heard an ambulance siren and assumed that someone in one of the junior races had been injured, but then this sound become ever too familiar, about every ten minutes, which subdued our mood. The ‘rumours’ around the registration area of broken bones, course shortening, delays and possible cancellation due to dangerous conditions abounded.

It was chaos, and after Linda and I investigating at three different information points, we established that the ladies race was going off 20mins late and that it would be 6k (rather than the planned 8k) and that we would be missing the big steep hill! (Similarly for the men, 10k instead of 12k). So with great enthusiasm we set off to apply what would be definitely needed electrical tape to our spikes and with triple knots lined up with England’s finest.

The race starter said ‘3mins to go’, followed by ‘enjoy the sight of this grass in front of you at the start ladies, because its the only grass you’ll see’ and he was right. I followed Kat’s advice of sticking to the right-hand edge of the course because it was less muddy, but every step seemed to take all my energy to pull my spikes out of the mud sucking them down like quicksand. And despite the removal of the infamous steep hill from the course, there were still hills that zapped your energy like you wouldn’t believe.

The only thing that made the race more bearable was the absolutely fantastic support for the BvH team. Stuart Pearson’s dad and daughter were a source of much needed encouragement on each and every of the three laps on one of the hills (plus hot coffee afterwards), and Stuart Leslie seemed to be on every part of the course at once, telling us how far we had to go. Aaron gave motivational shouts of ‘at least you won’t be lapped’ as we came up the second hill. Thanks to you all for bearing the mud and rain to support us.

Despite what she describes a graceful fall whilst cornering at speed early in the race, Linda led the BvH ladies home, followed by Marianne, Becky and Caroline to make up the scoring four. Despite stating that it was the ‘the worst race we’ve ever done’, Cat and Laura had great runs. Myself, Emily, Kat and Rachel followed and I was simply glad to have everyone back in one piece, injury free. We finished in the top half of 67 teams, placed a fantastic 32nd!

The men also showed amazing stamina in running in the eigth race of the day through the muddiest of mud, amongst 2,000 of the country’s best runners (the start is like a scene from Braveheart!) and we were glad to support them.

The drive home was, in true BvH fashion, a cake fest! Four different delicious cakes made an appearance and replenished lost energy – thanks very much to the bakers! Steve did a sterling job as our chauffeur and summed up the day by saying that the correct title for the race should have actually been the ‘National Swamp Championships’.

This brings to an end the 2010/2011Cross Country season and as ladies team captain, I would like to say thank you to the 24 ladies who have run throughout this season, you have all given 100% and run to the best of your ability in conditions that have not always been easy, and have made me very proud to be part of BvH. Well done!

Thanks also to all of those BvH members (plus family and friends) who have turned up to races and shouted and screamed (or was that supported!) us whilst we ran.