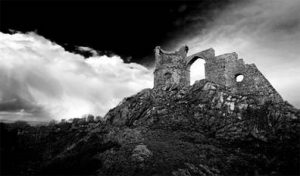 Lesley Pymm reports:  Another event that I coupled with a spot of parkrun tourism.  I needed to do The Wammy parkrun to regain Regionnaire status, and I realised that it was really close to Mow Cop – so a good excuse for a weekend of exploration.  The parkrun was good – much better than I expected as it was pretty flat and out and back.  Coffee at Newcastle (Staffs) RC clubhouse.

The main event of the weekend was Mow Cop hill race and I was not sure about it at all.  I had just got over falling down the stairs and then suddenly was struck down with something nasty (I suspect Aussie flu) and was taking a very long time getting over it.  Anyway, I decided to do it in the end and arrived in good time for the run at a village called Mount Pleasant.  I registered and then did a bit of a warm up.  I had been told that after the start it very quickly went into a bottleneck and people had to walk the first hill, so I didn’t worry too much about the start.

We ran over fields and eventually were climbing up the side of the folly that is Mow Cop.  Over the other side and it must have been predominantly downhill, although it was so muddy that I can’t say I appreciated it too much!  I was aware of the sweep just behind me and then suddenly he wasn’t there.  I’m still not really sure what happened to him, but eventually I got to a marshal who checked that I was OK – I said I was, just slow.  He asked if there was anyone behind and I told him the sweep was, and I thought that was all.  He went back to check on his colleague and then showed up and ran with me for the rest of the run. 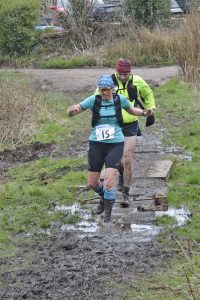 It did get very hard going at times as we started to climb and the finish was all (well, nearly all) uphill.  Eventually we got back to Mow Cop and started to go downhill to the end.  This mean stepping over some fences where they had kindly placed some bales of straw to assist.  I was still very pleased to accept help from the marshals.

The cakes at the end were amazing and then they called me out as the first in may category – you have to be in it to win it!