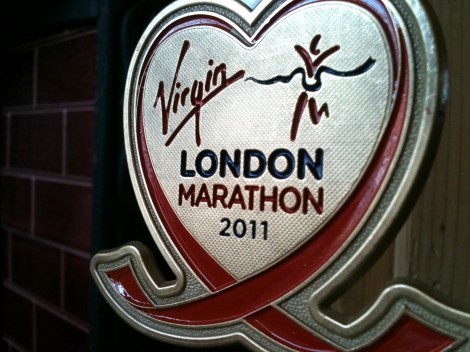 Report from Dan Willson: This was the third time I have run the London Marathon though the last was in 2003 and I had never yet managed a marathon under 3′ 35″.

After 13 good weeks of training and the cross country season I was much more hopeful for a better time, unless weather or injury got in the way.

I left the family at the red start and being in pen 3 only had a little time before I was over the line. Got down to Woolwich and the river at the right sort of pace and was only about 10 seconds behind Mike who was on one of the other starts. We ran together then for the next 10 miles and went through the half marathon time in just under 1.40.

Saw the family again in Deptford and later at 13 miles after Tower Bridge – luckily we had arranged rough meeting points and they were carrying a distinctive flag (at 24 miles though I was too tired to spot them). Surprised at the huge support all along the route with very little empty pavement on any part of the route. At about 13 or 14 miles saw the first of the lead men coming back the other way including Andrew Lemoncello who I think was the first brit at that point.

I had a bit of a push between 15 and 20 miles to see if I could get nearer a 3′ 15″ time but the heat and general exhaustion put paid to that idea and I was very happy to struggle at any sort of pace through the last 6 miles to get home in 3:21:34.

One Reply to “More London Marathon 2011”