Lesley Pymm reports: The weather was very kind for the Midland Masters XC this year.  It was mild and dry – if a little windy!

The course was the same as the previous couple of years. It is all a bit complicated at the beginning as the women and MM65s start off with the younger men, but after a circuit of a playing field the women and older men turn off and the younger men do another circuit and then head off for a small lap. 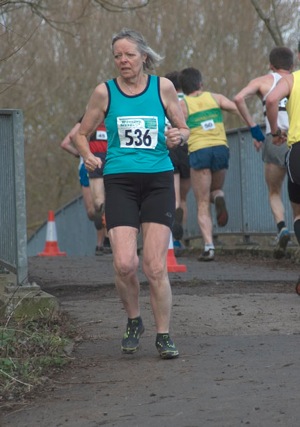 It sounds worse than it is, and generally works out OK.  Fairly early on in the women’s race there is a very steep hill.  The first time around it was still pretty dry, so not too bad at all – by the second lap it was a bit more slippery.

We then do a run through some woods, over a bridge and then up a nasty little bank and onto a path before heading off again along the river, under the road, up a hill and then down and under the road again by the river.  Into a muddy patch, through to some playing fields and back to the start and finish area – twice for the women!

It is a great little course and such a shame that there were no other BvH reps there – usually one or two men are there.  I got the FM55 silver medal again.  There were a lot of team medals that were not used as there were not the teams there.

Talking about teams – are any other women doing the British Masters XC on 25 March in Bath?  I will be running and if there is a team I will run in a younger age group, so I need to know.  Unlike the Midland Masters, the BMAF event is open, so you only have to meet the age category. Please let me know if you intend to run.