Lesley Pymm reports:  I had known about this event for a while and it had always clashed with other races.  When I saw it advertised ages ago, I signed up straight away and booked a couple of nights camping as well.  Then, of course, I started to have those problems with my knee.  It was looking less and less lightly that I would be running on Sunday, but I kept my hopes up!  I walked parkrun on the Saturday – and I mean walked, not race-walked!  Every time I tried to extend my step, it hurt.  I was feeling pretty fed up as we made our way over to Hay on Wye.

We walked from the campsite into Hay and back on the Saturday afternoon, and it was not feeling too bad.  I decided that I would be able to walk it, if they’d let me! I looked at the map and could see that there were places where the course went fairly close to the start/finish areas, so dropping out if it was too much was an option.

I showed up early on race day and the knee was feeling so much better.  The scenery was stunning.  The Begwns are managed by the National Trust and are just into Wales.  The Black Mountains are the backdrop, although the course is not too bad.  It was undulating rather than hilly.  It was an 800m walk from the parking area to the registration tent – and nothing hurt!  I went to get my number and ask if they were OK about me doing it, even if I ended up walking it all.  The people from Hay Hotfooters were so lovely.  They told me to take as long as I liked and they introduced me to the ‘last runner’, who was very friendly.  They didn’t want me to start early – just do it!

Feeling much more confident, I walked up to the start – another 650m uphill and close to the Roundabout from which the event takes its name.  This is a small copse enclosed in a wall!  The views from up here were lovely.  It was a downhill start – and downhills were what I had problems with, so I was not taking any chances.

The Race Director stood on the trig point to do the very entertaining briefing which, unusually, everyone could hear.  Then the race started.

Off we went and very soon I was last and chatting to the back marker.  I was doing a shuffle, hardly a run but more than a walk!  As we finished the downhill and the course levelled out a bit, I managed to make this more of a jog.  I was chatting to the back marker (Harriet) and suddenly realised that  I was about to overtake someone!  I now had no one to chat to but was not last!!

The course turned uphill and I could see that the man ahead was walking a bit.  I just maintained my jog and drew level with him.  He was relieved to see that I was not the ‘woman in the tabard’ as I passed him.  I told him I may have to walk later and he may come past me again.  The course went downhill again, but not too steeply so I was able to carry on jogging.  It then went onto a hard rocky path, to I tried to keep to the grass to the side where it was a bit more forgiving.

I could hear someone behind me, and assumed it was the man I had just passed.  I turned uphill again and a marshal told me that the tree half way up a hill was the half way point.  I was overtaken by the man I could hear, and it was a late starter, so I still had two runners behind me!

Going steadily up the hill, I could see two people ahead of me and I was gaining!  I caught up with them just after the small ford and one of them said ‘Have you run all of this hill?’  To be honest, it was not that steep, but it is the downhills I was more concerned about.  Four people behind me now! 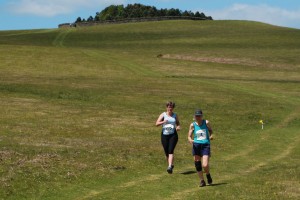 I was now jogging around the base of the Roundabout and Mike was there with the camera just as I passed my final scalp of the event!  He was amazed to see that I was actually running!  The course got more difficult from this point on.  There was a very short steep downhill that I decided I had better walk, but then I started to jog again.

Around a big loop and then there was a climb,  I could see people ahead, but decided it was a stupid idea to try to catch them.  Just keep this pace up and everything will be fine.  This was a bit more undulating, but still relatively easy running and I was so enjoying it!

I finished comfortably and then did have a little limp, but it eased off soon.  The Race Director congratulated me on doing a reasonable time in the circumstances.  Collected my T shirt and then went off for the hot drink and cake that was free to all runners.  The presentations were lovely.  Most people stayed behind for it and the atmosphere was so good.

This is certainly one for the diary next year – and I hope to be in a position to race it!