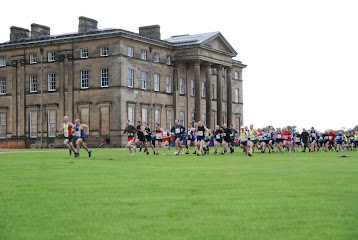 Lesley Pymm reports: What a fantastic day for a run. The sun shone and it was a cloudless sky.

The runners gathered at the front of Attingham Hall near Shrewsbury for the start of the event and, after a few comments from the organiser (we had been short-changed as the water feature was too shallow – he lied – and the warning that there was a new obstacle in the form of a tree to jump as we went into the woods) we were off.

A quick run over the grass to be funnelled through a gate which slowed us all down again. Then we were properly off. We did a loop of the front of the grounds, past surprised looking cattle and the River Severn with good views of the Wrekin, before coming around close to the front of the house and then over a bridge and up a bit of an incline.

Soon after that we ran around to the entrance to the woods. I defy anyone to jump the tree that was blocking the path – after a very inelegant roll over it, I was running through the woods. It was brilliant. In mile 4 there were quite a lot of stiles and then came the final mile – well, mile and a half really. We could hear the water feature for some distance as runners screams and spectators laughter assaulted our ears.

Just before I got into the pond, the man in front fell in. I am afraid I chickened a bit and held onto the rope. It was very slippery and people had splashed past me and I got mud and grot into my eyes, totally blurring my contact lenses. As I climbed out at the other end, it was really slippery. I must sort out my technique for this event! Anyway, it was then a very short run to the finish where there were drinks and bananas.

Prizegiving was by the stables cafe with lots of goodies for sale – typical National Trust fare.

A really good event and I was about 8.5 minutes faster than last year.