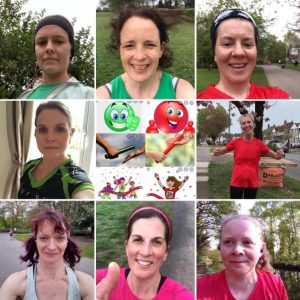 Fiona Barker reports: So, here’s the problem… one Friday night several Bournville Harriers meet, on Zoom of course, and realise that their motivation has disappeared into the murky and unexpected world of ‘lockdown’. The words of Boris to ‘stay at home, save the NHS, save lives’ have become so familiar to each of us and so heavy. We want to do all three well, we want to honour what it means to be a human community and we know that it’s right to do our bit in supporting others, but it’s hard. So, in this new world of being physically distant we tried to support each other to do that thing that we know helps each of us, it keeps us on an even keel, it keeps our bodies and our minds healthy, and is integral to our rhythm of life. And that thing is running.

As we talked we acknowledged that the rhythm of BvH and parkrun was so significant to each of us, and that it extended beyond the running, but into knowing that we would meet friendly faces, both familiar and new, each Monday, Thursday and Saturday. We also realised how significant the ‘Not Handicap’ had been for each of us. Something about running together, even though apart, had helped us feel less isolated and had been a motivator and we were thankful for this, and for the creativity of the BvH Committee.

Each of us has different gifts, and that’s probably one of the great things about BvH. If you didn’t know already, Bec Jones has the wonderful gift of organisation, and amazing ideas! And out of this above conversation and Bec’s amazing skills, The Lockdown Relay was born.

After many to-and-fro WhatsApp messages and reassurances that we could cope with the technical challenges (not running ones, you note!), the plan emerged. We agreed to split into two teams – Red and Green – each with four runners. Each team would run as per the plan for one mile in a location of their choosing. We wouldn’t meet to run, of course, but would communicate a passing and receiving of the baton via an emoji. A virtual starting gun would be fired and we would each run, virtually handing over the baton via WhatsApp. There was quite a lot of planning, we had to figure out where and how to save the emojis to ensure a swift hand over, we had to remember which colour emoji to use, and how to run with our phones! Some of us even went out for a practice to check that our phones could cope okay, mentioning no names of course (Sara Hewison…!). We did, of course, check all the details over and over again. You have to understand that we’re not competitive (not at all, of course!), and that none of us are sticklers for details (or rules!)

And so, on Friday 17th April, we gathered virtually at 6pm in our chosen places. We weren’t in the same places, and that’s important as it wouldn’t be right to unsettle that message of social distancing or to disrupt that which we are all working so hard to achieve for all of us. I discovered that loitering around the bandstand at CHP felt really wrong, and had to jog a little whilst waiting for Sara to hand over the baton! At 6pm the emoji starting gun was fired and Rachel and Stacey ran super fast and both handed over the baton within seconds of each other. When you receive the baton you have to send a thumbs up emoji, in the right colour, before running. It’s tricky! Next, Lorna and Sara, pelted out amazing sub-7mm, but also finished within seconds of each other. It was so close, literally less than 5 seconds were separating the teams. At this point, Bec and I took over the baton. The bit that I found hard, was managing to receive the baton, then encourage my phone to recognise my sweaty and wet finger to unlock it before finding the right thumbs up emoji and heading off. Who knew that phones and Garmins were such a performance! But, we ran and ran and finished, once again, within less than five seconds of each other. It felt so good to run and know that others were running too. I felt like I was flying and I beamed to all those I passed. After one mile Bec and I handed over our respective batons to Mathilde and Jaeda, who also ran like cheetahs and slipped through the virtual emoji finish line within two seconds of each other.

It was amazing. We had jelly legs but happy hearts!

And now, it’s become a fortnightly lockdown thing. We all run as fast as we can…together, but separate…with our lockdown emojis and our determined bodies. It’s speed work, it’s exhilarating, but most of all, it’s about being together, and I think we all love it!

And you can do it too! Just find a group of BvH friends (other runners welcome too, of course) and fix a time. Share your phone numbers and create a WhatsApp group. Split into two teams and run your hearts out. We might not be able to run together but we can run together in BvH spirit and community, and we need that too.

Haruki Marakami ends his inspiring book, ‘What I Talk About When I Talk About Running’ as follows, “Finally, I dedicate this book to all the runners I’ve encountered on the road – those I’ve passed, and those who’ve passed me. Without all of you, I never would have kept on running.” And so, our Lockdown Relay has become something of this. We all need each other, in different ways. For me, as I think about my BvH friends running their socks off, it makes me want to go a little faster and a little further. I carry them with me as I run, and I hope that they carry me too. Perhaps we all need to carry each other a little bit as we run, just because sometimes it’s hard to carry ourselves. And that’s okay.

And so, if you want to have a go, or just simply want to know how it all works, here are Bec’s wonderful instructions: