Only one wrong turning was made before finding the well managed car-parking field at Lilleshall Cricket Club. Being earlier than expected gave us the chance to take in the atmosphere at this intimate little race, and provide support at the fun-run.

The fun-runners lined up, in what looked like an attempt to get into the Guinness Book of Records; the finish line being only 15 yards in advance of the start at the edge of the field. However, 10 minutes later, the leading kids came streaming back in the opposite direction, many of them clutching their race numbers in their hands, where the duct tape had proved ineffective in its application.

Although minimal, the toilet facilities in the club bar were just about adequate for the numbers present. However, the cubicle door in the gents was missing an important feature – a handle on the mortice latch. Having being locked in the Rowheath changing rooms already this month, I erred on the side of caution and left the door open.

A couple of other teal vests then arrived, in the shape of Stuart P and Andy H. They provided some words of advice regarding the elevation profile, and we lined up for the start, facing in the opposite direction to the fun runners.

This multi-terrain race soon had us off the cricket field, and onto the road. The first kilometre was all downhill, and the competitors were soon spread out thinly enough to avoid congestion issues. We were then into crop fields, which had frequent muddy puddles to avoid, but plenty of firmer ground available.

The fourth kilometre took us through a quarry, so this was already becoming a beautiful scenic route. Even the smell of the dairy farm that came next, was not detracting from the experience.

Running in single file then became necessary for the only time in the race, along a thin, slightly slippery path. After this, we were on to a wet tractor’s path, before entering the most difficult section of the route, which involved thick mud, bricks, and three or four stiles.

The water station was up next, the youngsters doing a great job of handing out the paper cups. I’m usually the sort of runner who likes to hold on to their water for a while, but on this occasion, I felt compelled to discard my cup almost immediately into the growing pile, due to the unlikely appearance of any bins.

The welcome sight of a tarmac road was quickly vanquished by the realisation that it was uphill. However, this was now near the start area, so the psychological boost of familiar sights near the finish line helped, and the uphill was quickly repaid with a steep downhill in the next field. As I careered down this hill, I overheard a knowledgeable runner say to the one next to him that he was “saving a bit for the monument”. So I looked up to see the titular monument, worryingly high above us. Coupled with the sign that indicated we were likely to fall over about now, I felt that now was a time to concentrate.

A fairly flat kilometre later, we were at the base of the short, steep bank leading up to the monument. I’m usually poor running up inclines, but this was almost a clamber, and somehow I managed to make five or six places by the time I reached the top. Once down the other side, there was just the final kilometre to go. This was all on road, apart from the final 100m on the cricket pitch. The enthusiastic crowd here spurred me on, and I am pleased that I achieved my target time with around 15 seconds to spare.

There was no medal or t-shirt for finishers, but the goody bag was an interesting mix, with an embroidered towel, a primula, and a laminated kid’s drawing. Mine was by Ella in year 2, who loves her mum very much. I could not see any team mates, who had finished ahead of me, so I grabbed a selfie after finishing my banana.

Then came an unfortunate announcement from the club balcony. An absent marshal meant that some of the front runners took a wrong turning. The majority of marshals throughout the course were of the silent type, but there were a few vociferous ones providing encouragement and / or warnings of impending obstacles. I am not sure of the extent of the problem or where it was, but I hope it hasn’t put too much of a dampener on what was an otherwise well organised, wonderfully scenic, and very enjoyable race. 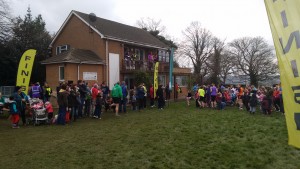 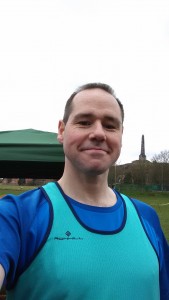 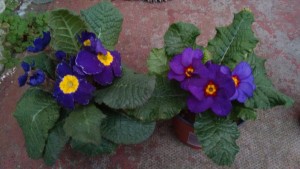 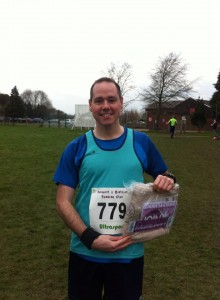 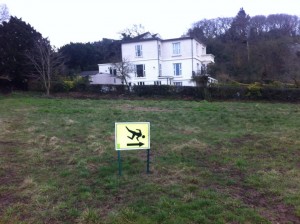