I never thought I’d ever enter a marathon…until I was tempted by the challenge of a trail run from Avebury to Stonehenge. I decided that a road marathon would be too much like hard work, I’d actually have to run the whole thing, whereas with a trail run there would be hills to mix things up a bit (i.e. a chance to legitimately walk) and interesting scenery to take my mind off the fact that I was going to attempt to run an utterly ridiculous distance.

Training got off to a bad start, I’ll blame the snow, but it was really a large part due to laziness. Nevertheless, I did manage to get up to 20 miles along very hilly country lanes in Cornwall. If you can run Cornish hills you can run most things (OK, I walked up almost all of them), and anyway, it wasn’t like there would be proper hills in Wiltshire…

Marathon day came around quicker than expected and suddenly I was waking up at a ridiculous time trying to shovel as much food into myself as was possible. The route is from A to B rather than circular, so we parked at the finish (Stonehenge) and then caught the 7:30 shuttle bus to the start at Avebury. On route I fuelled up some more with jam sandwiches and a chocolate bar. Mum was once again running with me and she got chatting with a V75 runner on the coach who said the route would be challenging and we should expect to complete it in 6 hours. 6 hours?! There was no way I wanted to be on my feet for that long! We got to Avebury in plenty of time, so enjoyed a gentle wander around the Neolithic stone circle after picking up our race numbers. Around the stones were sheep, all painted with different numbers, mum and Simon spotted sheep with their number on, but there was no number 8 anywhere…was this a sign?!

The race started at 10:30, which seemed far too late as it would mean we would be running through the hottest part of the day (but at least it gave me plenty of time to drink lots of water and test the excellent toilet facilities: barely a queue, which is most unusual). Mum and I had decided to run together, so, being complete marathon novices, we decided to start near the back, whilst Simon headed towards the front. The start was slow as the single track road rapidly narrowed to a single file footpath, but this was no bad thing as it allowed us to keep our pace steady rather than shoot off too fast. I had decided to run between 9-9.5 minute miles to have any chance of conserving energy to stagger to the end, so my GPS Garmin watch was a fantastic help with pacing (although I did have to keep reminding mum to slow down as she kept creeping towards her normal speedy half marathon pace). The first half was the easiest half marathon I’ve ever done: a lovely gentle pace, beautiful views and undulating hills. This was by far the most scenic part of the route. Water stations were plentiful (every 5km or so), which was incredibly important in the hot sunshine. However, the only downside was that the mile markers were appalling: at one point they were 1.5 miles too early, once again I was glad of my Garmin.

At mile 10 we reached military grounds and could hear gun shots as we reached the bottom of the biggest hill. Was this a tactic to make people run faster up the hill?! We started gently jogging up the hill, but as the gradient steepened and everyone else started to walk, we felt no shame in conserving our energy for later when the going would get tougher. Luckily no one shot us; I suppose we wouldn’t have been good target practice as we were moving very slowly! This part was on roads, which felt hard on the legs after the soft trails of the previous miles, but the toughest terrain was waiting for us after the half-way point: endless gravel tracks undulating across military training areas. This part was also brutally exposed, it would be miserable in the rain, but today it was roasting hot with the sun relentlessly beating down on our heads. At every water station I drank a few mouthfuls and tipped the rest over my head to try to cool down. I get hot running cross country races in the snow, what on earth was I doing running in hot spring sunshine? The only problem with the water over head trick was that it washed some of my sun cream off and I ended up with unusual streaky sunburn at the end.

At mile 17 everything started to hurt. It was almost amusing thinking about how strange it was that really bizarre muscles I didn’t know I had were aching. By now the only way to keep going was to focus on the numbers: less than 10 miles to go, then it was down to single figures, then it was only 10km…10km is a gentle run with club on a Monday, of course I could do that (except for the small matter of the previous 20 miles). At mile 22 mum got a horrendous stitch and her left knee started to hurt. There was no chance of sprinting off and leaving her, a) I was too tired and b) we had agreed to run together and she had already sacrificed a half marathon PB a year ago when she dragged me around my first big race. For the last few miles we did a mixture of running and walking, which was particularly hard work. I think I would have preferred to just stick at a steady plod/run, but it was easier on mum’s knee to walk a bit then run some more, and to be honest I was feeling really, really tired by this point.

Before I knew it we had reached mile 23, only about 5km to go! That’s less than half an hour (well, normally) and suddenly it felt like I really could do it! There was just the small matter of keeping mum going whilst she muttered “I’m never doing this again”. The last stretch dropped gently downhill, and there in front of us was Stonehenge! We held hands and attempted a very slow-motion ‘sprint’ finish up the grassy field and over the finish line. We’d done it! We’d actually completed our first marathon! What an incredible feeling, a mixture of complete exhaustion and elation all at once. We found Simon, who had long finished, and picked up our medals and goody bag. No free t-shirt sadly, and the goody bag consisted of a rather dubious pizza slice, small cake and a piece of fruit; however I was so hungry I could eat virtually anything. The free tea was more useful for reviving us! After a sit down mum had revived a little and we were able to stagger around Stonehenge thanks to free entry for all runners.

Would I recommend the event? Definitely, but it’s tough, really, really tough. Even Simon admitted it was hard work, and he’s already done a couple marathons (all on roads). The hills are hard and the gravel tracks and exposed nature of the route means it’s a struggle at times, but for novelty factor (half the route is normally closed to the public because it crosses military training areas) it’s certainly worth a go. There are also walking routes, a half marathon and a 56km cycle ride, which my dad did (and thoroughly enjoyed), so it’s certainly an event to drag friends and family along to, even if they’re not runners; plus there’s the feel good factor of it being for charity (Wiltshire Wildlife Trust)! Results were up quickly and I was delighted to find I was 106th (out of 239), and 19th lady (out of 65). 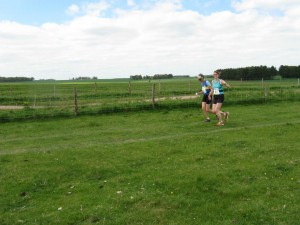 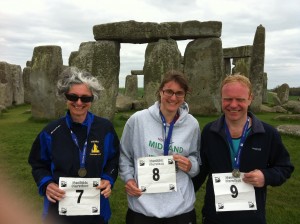 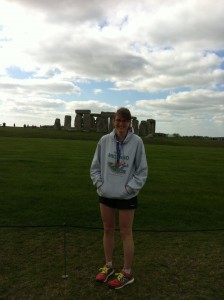 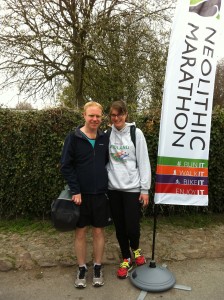