Having registered for this race event back in 2012, it slowly crept up on us. Summer training weekends of cycling and running could not truly prepare us for the weather that we could encounter in the Scottish highlands and did indeed encounter! The Scotland C2C challenge is a two day event (one day for nutters) traversing 105 miles of Scotland from the East coast (Nairn) to the West coast (Ballachulish near Glencoe) on foot, bike and kayak.

We both had an amazing time and would agree that this was the toughest event we’ve ever done. I completed the race in a time of 10 hrs and 50 mins, finishing 42nd of 500+ starters and Ewan finished in a time of 12 hrs and 1 min, finishing 116th. Our story is below!

Ewan Ross and I drove up on Thursday night, in preparation to register on Friday morning and drop off our bikes at the first transition point at Cawdor castle. This was our first opportunity to see the start point and some of the route and to start thinking about tactics. Hints of nervousness were beginning to show, no going back now.

Saturday morning arrived after a night of broken sleep and we awoke to a glorious sunny but chilly day, the gods were on our side. We made our way to the start, did the customary dipping of ones toe into the sea on this coast, hoping to complete the journey doing the same on the other coast. The 500+  solo’s and pairs were corralled into the starting pen and soon after were launched into the challenge by a demure  countdown. Using my BvH XC experience, I chose to go off quick for this first 7 mile trail run to Cawdor castle, in the knowledge that there would be little overtaking opportunities and you could easily lose time behind slower runners. This turned out to be a good strategy as I managed to position myself with the leaders and finished this section in 6th place. Ewan unfortunately wasn’t able to get away as I did and got held up during this phase, also getting caught out on the trail stubbling, resulting in a cut palm and gashed knee. This didn’t stop him though and he battled on. As he finished this section, I had got myself onto my bike and made my way out of the transition zone to start the 48 mile cycle section on roads over the highlands running alongside Loch Ness down to Fort Augustus. This route was very undulating against a head wind. Two large climbs to zap the life out of your legs were challenging, but were followed by an incredible high speed decent into Fort Augustus. Both Ewan and I were on MTBs and those participants on road bikes clearly had an advantage and we both were overtaken by several road bikes. At the transition zone, you leapt off your bike, ran to the Loch and climbed aboard a kayak to paddle 1 mile on Loch Ness before disembarking and running to the finishing point of Day1.

Having finished this first day, we got our tents up, took a hot shower (bliss), had some physio attention to our legs and then got some much needed fuel and hydration back into our bodies. Ewan’s knee was swelling up and in the absence of ice, the Physio suggested he go and stand in the Loch to try and reduce the swelling-Suffice to say (and being Scottish) he poo pooed that idea.

The forecast for Day 2 was rain and gales and we were not let down, Sunday was truly a completely different season to Saturday. The rain and gales started about 3 am and began to batter our tents, both leaked with one taking such a battering that it was put to rest. There was a 1.5 hr start window for Day 2, which was composed of a 32 mile off-road cycle, 14 mile trek/run and 1.5 mile kayak to the finishing point. The rain meant the off-road trails were a mess, and anyone that didn’t have a MTB suffered greatly here. We both managed to creep back some time during this stage. The weather fluctuated between rain, hail, sleet and it was hard to see where you were going at times on the bike, as glasses were completely ineffective. Arriving into Fort William, we had a grace period of 30 mins to get ourselves prepared for the final 14 mile trek over the Highlands around Ben Nevis. The amount of rain meant crossing several fords and small streams, by that time being wet was the norm, so you just marched on. It was very cold, and keeping moving was the only way to stay warm even though your legs were screaming ‘stop!’. At 4 miles from the end, we were informed the weather was too severe and unsafe for the kayaking stage and so the route had been altered, although this did mean we had a bit further to run as a result. With a final surge of energy we battled on and successfully reached the new finish line. At last this nightmare was over!

We had the foresight to book a hotel room for the finish, and never has a hot shower or warm bed been so welcomed!

In summing up this event, it can only be described as- Apocalyptic, Biblical, emotional, challenging and of course epic!

I cannot recommend this experience highly enough, it was amazing! 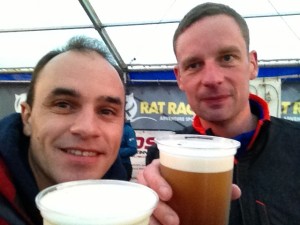