Lesley Pymm reports:  What a lovely day for a fell race in the Peak District.  The race started  at the Lathkil Hotel in Over Haddon, where there was coffee and cakes for sale.  The event was in aid of Children in Need.  The race is a registered fell race: BM : 11.5km (7.1m)/290m (950’), so not too much climbing!

Running from the Hotel through the village, the course descends into Lathkil Dale along a tarmac road which was pretty steep and slippery.   I was pleased to reach the point where the seniors turn right to run west and up the dale.  After two miles of part track (good running) and rocky path (which was slippy), the route then takes a left over Sheepwash Bridge which was very slippery!  I think most of the people running near me walked that bit for safety.  We then left Lathkil Dale for a short stretch of Cales Dale.  Bearing left and over a stile, steps then go steeply out of Cales Dale and on to open fields.  There were a lot of steps which I found hard going, so was pleased to get past them.  Continuing to climb steadily for a half mile, the course reaches the high point of the route passing around Calling Low Farm, at about 1050’.   Following the route of the Limestone Way, across open fields,  there were a lot of drystone wall stiles and crush stiles, which slowed me down.  There was then a short bit of road along Moor Lane for a few hundred yards, and then left over the fields before crossing Back Lane. 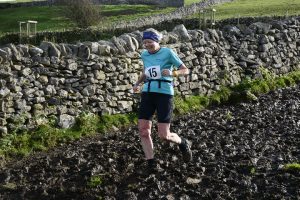 Climbing the drystone wall stile, Over Haddon was in view and the white buildings of the Hotel, but I knew that there was a short loop when I got back to the village.  Over more open fields, passing through Meadow Place Grange.  We had been warned that the farm here was muddy – and they did not lie.  Proper shiggy, as the cows looked on!  Through the gate the course winds its way down Meadow Place Wood and back to Lathkil Lodge.  Crossing the footbridge, we turned immediately right to follow the dale as it drops towards Conksbury Bridge.  At the bridge we turned up the road for hundred yards where, at a sharp bend in the road, we took the footpath to the left.  The final half mile climbs steadily out of the dale and entering the last field the finish comes into sight.