There was a great turn out and, after a brief shower before we started, the evening turned out to be a good one for running.  The midges were not as vigilant as they sometimes are and the air was relatively cool. 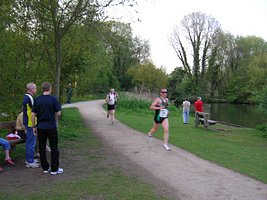 This is a two lap multi-terrain course which is mainly flat(ish).  During the second lap I found that the sun was reflecting off the water and it was a bit difficult to see for a while – but I managed!  Terry Doherty was there as well and completed in an excellent 44.15.  I took 58.10, which was a few minutes quicker than last year, so I was quite pleased.

This is a friendly event with most of the local clubs represented and there were also a large number of unattached runners.  The first two women were unattached – don’t worry Linda, your course record is still intact, but they did very well!