Gayle Fatchett’s brilliant race report got lost in the post last month (sorry Gayle), but here it is:

After growing up in Keyworth, South Nottinghamshire and seeing year on year a crazy group of runners going out in freezing conditions to run 13.1 miles around the hills of the surrounding rural villages in the annual Turkey Trot, I thought it was about time I gave it a go (and also write my first race report!).

The entries opened in late September and after seeing commentary online, I knew that I had to get my entry in quick. I was not wrong and all 1,100 places had gone by 6.30pm that evening. I think that the run has got a bit of a cult following due to it being particularly challenging. The event is organised by the local Scout group and “be prepared” they were. I have to say that it was the most well organised event I have ran in, from the information sent out beforehand to the pre and post race facilities.

Staying overnight at my parents, my husband Gareth (who decided to run dressed as Santa) and I jogged the 10 minutes down to the Race HQ, my old secondary school, for the 10.15 start. The bag drop was well organised and secure in the school hall and the toilet facilities were good.

The participants were mainly club runners from the East Midlands and Lincolnshire and so I was proud to be running in teal. After seeing a few familiar faces from my school days, we were off. The run starts for a short downhill section and then up for the first climb of the race. I knew this well as my way home from school and it flew by as you get carried away with the mass start. I knew that at the top it would be mainly flat and downhill for the next 2 miles and so I decided to try to get a good pace going before “the hill”. At about the 2 miles point, an old teacher from my primary school who was also running recognised me – I obviously haven’t changed much since the age of 11! and a quick catch up gave me a nice boost for what was awaiting us.  Supporters were also waiting with jelly babies giving me further reason to worry about what lay ahead.

The most significant hill, an elevation of 300m, kicks in at about 2 1/2 miles in. I knew that I had to attack it to avoid that running backwards feeling. I managed to overtake quite a few people on the way up, but what a killer! It was such a relief to get to the top with the knowledge that that was the steepest hill out of the way. The course then takes you on an undulating route to the village of Wysall where lots of local support was waiting to cheer us on. The next part of the route is mainly flat, taking you towards Willoughby and this gave us the opportunity for some banter with the other runners including about the fact that the country lanes on the route are not closed to motorists. It is so well marshalled that it is perfectly safe but some of the motorists were not looking too impressed that their Sunday drives were being held up.

There is then a long slow climb into Willoughby and then another on the other side of this village until you run back through the village centre and the 7 mile water station. We then descended down into Widmerpool (yes, all the villages around there begin with a “W”) and we enjoyed a chat with a man wearing a turkey on his head, for whom this was his 60th race of the year with another 3 to go! I was feeling quite good at this point and, despite not wearing a watch to keep the pace, I thought I might  be on for a 2 hour finish. I kept pushing on and knew that as we came out of Widmerpool and up another short hill to the mile 10 marker, I only had a Parkrun to go.

This would have been fine had we then not turned up towards Stanton on the Wolds and a long slow hill. At this point a few runners had started walking but I didn’t want to give up and throw away a PB opportunity so I kept plodding on trying to inject some life into my legs which were starting to feel very heavy at this point. The route here was a bit up and down until we arrived into Stanton and some of the finishers had jogged back to this point to give us their support. From here it was mainly flat and then once you hit the 12 mile marker the next half a mile is downhill. At the 12 mile point, the main with a turkey on his head had caught me up and I asked him what time we were looking at. His watch said 1:53:30 and I knew that there was no way I could run my last, let alone any mile in less than 6 1/2 minutes to achieve sub 2 hours. The downhill section back into Keyworth was a relief to my legs but, being familiar with the village, I knew that I had another couple of short sharp hills to overcome before the finish. I kept plodding on knowing that I was still on for a PB.  I felt myself slowing down on the last hill but then all of a sudden the corner appears and hundreds of people cheering you to finish. A chap I had been tracking then decided to go for a sprint finish and I decided to follow him, bringing me home in 2:03:00 and a PB of over 5 minutes. I was absolutely chuffed, particular considering the course. My target for 2014 (which I have now committed to print!) is to seek out a sub 2 hour half marathon finish.

Some interesting news, was that this year, for the first time, the Turkey Trot welcomed a blind runner onto the course, Haseeb Ahmad, who posted an awesome 1:28:26. The following was then reported “The Turkey Trot also brings out the best in people. We’ve been asked to post a special thank-you to runner 823, Karl Mallyon, who kindly stepped in to guide Haseeb for the last 4 miles when his guide unfortunately became too unwell to continue, and did a superb job helping Haseeb to his time.”

That really sums up this race – great camaraderie, great support and a fantastic race which I will definitely be signing up for again. 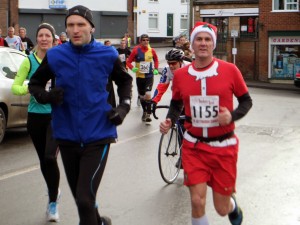