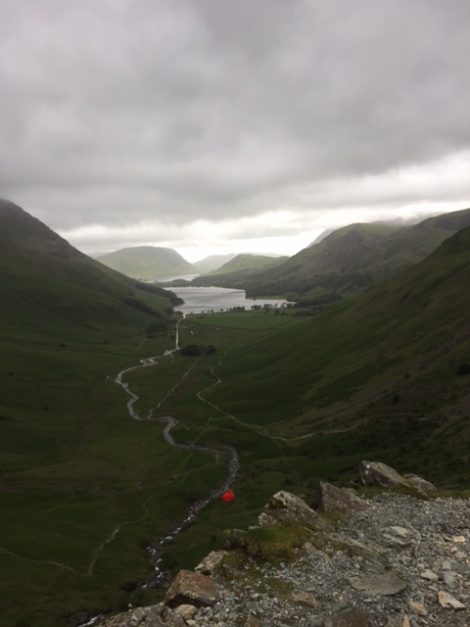 Simeon Whiting Reports: As I write this report, it’s four days since the race. I’m still shrieking involuntarily, every time I crouch down. I’ve been stiff after races before, of course, but nothing like this. I went into the event expecting it would be demanding. I wasn’t disappointed.

I should explain from the start that I had unfinished business with the Keswick Mountain Festival 50K. I started the race last year with a stiff calf muscle and managed about 8 miles before a distinct twanging sensation in said calf left me lolling on the ground, spouting a series of very rude words, at some volume. But I wasn’t going to be beaten. By the time I’d limped to the next check point to pull out, I’d already decided I’d come back this year to finish what I’d started.

This didn’t seem like such a good idea at 5.45am last Sunday. Waiting for the start of my second attempt at the KMF 50, I was all too aware of what awaited me – 30+ miles of ‘technical’* trails, with nearly 6,000ft of elevation gain. The weather was less than ideal, too. A steady drizzle had set in and winds of up to 60mph were forecast on high ground. During his briefing, the race director mentioned, as a throwaway line, ‘So I’m guessing you’re all used to running on mountains in windy conditions, yeah?’ Let’s see. Running: yup. Mountains: er… kinda. Wind: I s’pose. All three at once: not so much so.

If that wasn’t off-putting enough, a glance at my fellow runners put the fear of God in me. I was surrounded by hardened fell runners: tough, sinewy, weathered types who look like they’ve been carved out of teak, and pepper their conversation with gems like, ‘Oh yeah, you can’t go wrong on Skiddaw. Just head right and you’ll go straight down to the car park.’

All of these things combined made me feel that what awaited was an ordeal to be endured, rather than a challenge to be enjoyed.

So I started with vague sense of dread. I was pleasantly surprised, then, to tick off the first 9 miles without a hitch. Yes, there were climbs, but nothing I couldn’t handle. I trotted into the first aid station feeling full of beans. I grabbed a banana and a handful of peanuts, refilled my water bottles and got on my way again, as quickly as I could. Another runner now joined me for a couple of miles. It turned out she was a bit of a talker, and I enjoyed comparing notes on footwear and other ultras we’d tried. She had some useful local knowledge, too. We made it to the second check point in 2 hours 30.

I was feeling quite perky at this point. That feeling didn’t last long. Immediately after the check point, Honister Pass was waiting. Oh my. The climb was long, steep and exposed. It would have been brutal on a good day. This was not a good day. My colleagues and I had to lean sideways into the wind to avoid being picked up and deposited somewhere in the Irish Sea. And if the climb was brutal, the descent was terrifying. The kit list should have included a rope and harness.

Suddenly, a moment of pure wonder and serenity. Turning a corner in the path, still gibbering with fright, I saw an absolutely glorious vista open up in front of me. This, I remembered, was why I signed up for this lunatic escapade in the first place.

I plodded on to Crummock Water and the third check point. The challenge now was having to think about every single step: mud, hidden rocks, floods and more mud made the going treacherous. I also faced the dilemma of either wearing my jacket, sweating like a pig and dehydrating myself, or not wearing it and getting soaked and freezing. I mostly went for the ‘soaked and freezing’ option.

And now came my lowest point. The stretch from 21-25 miles was lonely and isolated, with no landmarks and seemingly endless climbs. I was tired, hungry, discouraged and slowing down. I didn’t seem to be getting anywhere. Perhaps I should just drop out, I told myself.

‘Oh, so you’re quitting then, are you?’ I replied, internally. ‘Alright then, genius, how are you going to get back to Keswick? You’re stuck up a mountain in the middle of nowhere with no idea where you are. You’ll have to keep going at least as far as the next check point.’

Dammit. I was right. On I plodded.

When I reached the fourth check point, I knew there was only 5K until the fifth, then another 5K until the finish. I loaded up on nuts and jelly beans, and pressed on before my inner wuss decided I should call it a day.

When I finally stumbled into Keswick, I was knackered, covered in mud and slightly hysterical. Jo and the boys were waiting for me at the finish, and Levi ran the last 100m with me – what a lovely way to cross the line. What followed was probably one of the most surreal experiences of my life. Jo confidently led the way to a ‘bistro’ for Sunday lunch. On arrival, we found it was actually an old folks’ home. The waiting staff were very welcoming, but insisted I should sit on a bar towel to keep the mud off my chair. ‘Springtime for Hitler’ from The Producers was playing on the radio. I began to giggle.

My official finishing time was 7:36:15. But I don’t really care about that. Just surviving the thing was an achievement. And would I do it again? Not a bloody chance. I’ve proved my point now and have absolutely no reason for putting myself through it again. But one thing’s for sure: however much my legs hate me right now, not finishing hurts a hell of a lot more.

(* ‘Technical’ tends to be trail running shorthand for ‘rocky as hell’, ‘bastard steep’ and often both at once.) 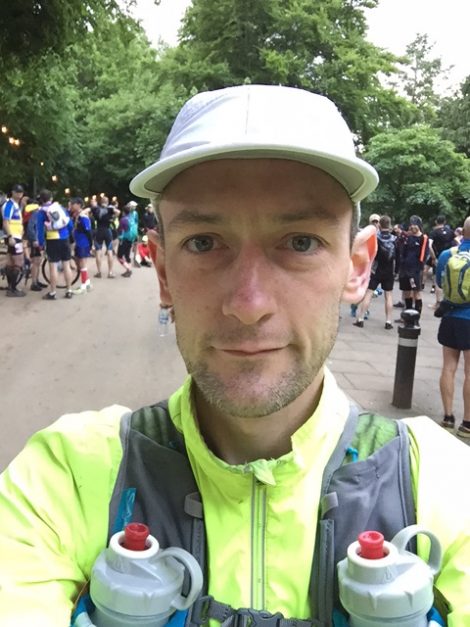 One of me at the start (portable loos not pictured)