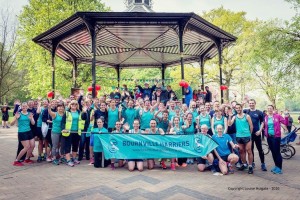 From Suz West: Some of you may be wondering why I would write a report about Cannon Hill parkrun as it’s something a large number of us do week in week out. Our home ground-  the parkrun, our bar codes when processed states, is Home. This was a special event in Memory of our friend, my training partner and our team mate John Enright. A mob match between Kings Heath Running Club and Bournville Harriers.

I realise some of you would not have met John, or realise the significance of a competition with Kings Heath. Those of you who did have the privilege to meet him will know he had a competitive streak that well matches mine. Week after week he would chase a Kings Heath runner named Sean Whan. He was John’s target and as he always told, me pick a target and try to catch them. It worked well for John but I’m not sure if he ever did beat Sean.

On Saturday, 1016 runners turned up including some of John’s friends and family. This meant it was the second biggest parkrun in the country this week and also a record turn out for CH parkrun! BvH had 63 runners and KH had 131 so we were out numbered but not out ran. Cake stands were set up on either side – a line had been drawn and the competition had begun, albeit a cake bake off. Both clubs were also competing to see who could raise the most for the British Heart Foundation. Both sides were filled with mouthwatering temptations. KH had orange and black and cakes with lions. We had teal cakes , teal cakes and more teal cakes. I’d clocked what I wanted – Monica’s Pineapple Upside Down Cake, but I never did get to try some. Paul Holloway later informed me he ate the last piece and it was pineappley and upside downy!!

The usual parkrun announcements were done. This wasn’t just a normal parkrun though and it was only fitting to say something about John. Stacey had suggested my earlier Facebook status. I agreed, but if I had read it out I would have just ended up in a heap so Stacey read what I had written earlier:
“Today is when running is really about running; it’s more than a sport. If anyone thinks it’s a lonely, solo sport, nothing could be further from the truth. It’s a community one… one that pulls together. Yes there’s competitiveness, rivalry and banter but all in good spirit. I’m proud that we come together today and celebrate and remember a great runner, friend and training partner.”
Stacey read this out and when John’s name was mentioned there was an immediate response of clapping. Then everything was silent, people were listening to my words. Words from my heart. I could feel myself chocking up. John’s daughters were beside me eagerly awaiting to sound the horn to start us off. As I stepped down from the bandstand I gave Rachel (John’s wife) a hug and she told me to have a good run.
So I decided to get to the front. I was feeling very emotional at this point and surrounded by teal and orange and black. I lost count of how many people said kind words to me as I positioned myself in a rather hopeful position. Poppy and Lilly sounded the horn and we were off. I really don’t need to describe the route as 62 of you were there. I knew I was going too fast but carried on at this ridiculous pace. Going back past the bandstand I got a massive cheer and “Go Suz”. This give me a lift – not that I needed a lift, my adrenaline must have been going crazy. I looked at my watch just past the tea room and seen that really i needed to be going at least 15 secs slower. Monica, Julie and James all overtook me, I knew I was blowing up now as I would normally be in this group and the fact they came from behind was enough to make me know I wasn’t going to catch them back up.
It didn’t matter, I hadn’t come for a pb – although I’m determined I can match Johns pb at parkrun he insisted I could and I believe I can. He would have like to have matched my HM time and I had told him he would do this and I believed he would have. That’s what I was doing here now in this run – remembering John and how we trained together. What would he say? I know exactly what he would have said – there’s plenty of time mate, you will do it just keep working at it. He would have also reminded me that a parkrun pb two weeks after VLM is probably not going to happen.
So many people were still running the other way as I ran back from the triangle, I kept hearing my name constantly. I started to become overwhelmed by the whole event and was struggling not to burst into tears really. I had also developed really bad stitch, my pace really slowed now. I ran past Rachel who was marshalling and cheering me on. Not far to go now, just the hill and I’m home. Then again I was always home. John I believe is always running at Cannon Hill as it’s the last place we trained together. A place we trained a lot together, a special place full of special memories of John. Today has created even more special memories for me of this park.
All together we raised £1318.76 for the British Heart Foundation. Bournville Harriers won the bake off. It should also be noted that we had 5 of the top 6 runners – awesome work by every one. So next year we need more runners. It’s ok I have a cunning plan its called the beginners course!
Photograph courtesy of Louise Holgate