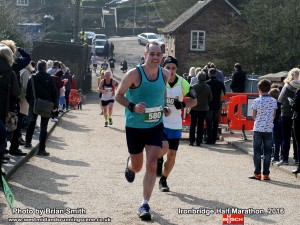 Dave Powner Reports: This was my fourth consecutive appearance at this tough race, where the recent weather conditions play a significant role. As conditions were almost identical to last year, it was tempting to copy-and-paste my previous report!

I’m an improved runner this year, but some persistent niggles in the last few months meant that I wasn’t going to be too ambitious. My game-plan was simply to match last year’s kilometre splits, and nab my best time for the course if I had enough left in me at the end.

The start was delayed 15 minutes, and luckily for me, this was announced just as I was about to warm up. This news would have been well received by the few dozen people still queueing for the portable loos.

It’s a fairly intimate race, with around 700 runners. That’s still enough to cause severe congestion in the first kilometre, because we start in a very wide funnel, and are soon reduced to 2 or 3 abreast on the Silkin Way. I avoided last year’s mistake of starting too far back, and so got off to a decent start.

The first half of the race is all downhill, and had a couple of isolated spots of cheery supporters. It was turning into a pleasant sunny day, and as we crossed the famous Iron Bridge, the big crowd ensured that the official photographer snapped mostly smiley faces. This was also one of several spots where kids were offering jelly babies to the competitors.

Then as expected, it started to get tough. Roadworks meant that there was much hopping on and off the slightly wonky pavement, keeping alert to avoid similarly inconvenienced pedestrians and cars. Marshalling here was excellent though, along with everywhere else on the course. A sharp right turn saw us faced with the ominous hill, a kilometre that would take 90 seconds longer than the others. This revealed the only notable difference from last year; being a month earlier, you couldn’t smell the wild garlic!

The course then flattened out onto the appropriately named Rough Park. It is here that things always get tricky underfoot, with plenty of mud and waterlogging. Thanks to my newly acquired cross country experience, I was confident enough to plough straight through the middle of the murky puddles, easily passing the other runners who tiptoed carefully around the slippery edges. I did however get a big shock when one such puddle turned out to be somewhat deeper than I was expecting! Fortunately, it was not quite up to Dawn French magnitude.

After a couple of kilometers in Rough Park, we were back onto the Silkin way for the final stretch. A glance at my watch, and I knew I was pretty much bang on target, but felt I was lacking the extra energy required to beat my previous effort. For the second time, I made use of a kid’s “Touch for Power” sign. I was really hoping this would work, because with just 3km to go, my legs were beginning to suffer. “Your legs are hurting because you’re kicking ass”, claimed another sign. Good to know.

A few minutes later, I did indeed feel slightly better, but not enough to put in a fast final push. The last 100m are all uphill, and it was a struggle to cross the line, but I managed to knock 9.3 seconds off my previous best on that course (note the all-important “point three”, courtesy of their new chip timing system)

The goody bag this year contained a good reusable water bottle, a great flapjack, and as usual, an excellent technical t-shirt, this year’s fluorescent colour of choice being lime green. No buff this year, though!

After the race, it’s always worth checking the official photographer Brian Smith’s Page. His pictures are always of great quality, and this year, my photo may shed some light on what’s been contributing to my recent niggles. I need to look at that potential ankle-breaking left foot plant!