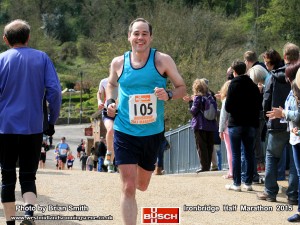 The frozen conditions on my first attempt in March 2013 necessitated a postponement, hoping for a thaw that never happened. Last year fared no better in early April; whilst warmer, it was equally as wet, so the long stretches of mud proved to be even more of a hindrance than the previous year, as they were not frozen solid.

So this year’s event being held mid April, after a dry spell of a whole week, promised a more lenient experience. Nevertheless, I selected my trail shoes for this outing, erring on the side of caution.

The arena at the north end of the town park is an excellent area for starting races from. However, it was not used to its full potential on this occasion, with no PA, no music, no stalls, no use of the long circular path, and no inflatable start / finish line. There were almost enough portable loos, with only a 5 minute queue forming, but time was made slightly more precious, by the need to queue up for your timing chip, too.

This relatively inconspicuous start area was well managed, although as the masses gathered behind the start line at the southern exit of the arena, due to the absence of a marked start pen, we formed an awkward triangular arrangement. Then as we poured over the blue chip-timing mat, there was the usual pleasing crescendo of pings and beeps from this mat and competitors’ GPS watches.

The early jostling of the 600 strong field was soon over, so I started to mull over my race plan. I knew from previous efforts, that there is no chance of a negative split on this course. The first 8km are all downhill, followed by 5km of undulation. Then you’ve got the 8km climb to get back where you started. I had studied my previous performances, and using the better of the two as a guide, had memorised my intended kilometre splits. This was achieved using a mnemonic regarding the fabled delivery of refrigerated foodstuffs in adverse conditions.

Unfortunately, in this memory exercise, I had forgotten to account for the slight change in the course this year. An extra kilometre had been tagged on near the start, at the expense of an interesting but tough kilometre that took you underneath the titular iron bridge, alongside people’s back gardens, trampling over wild garlic, before climbing to the bridge. This gave my brain something to do during the first kilometre, while settling in.

The early section passed comfortably, and it was clear that we had a good set of marshals providing support at every corner. The unusually placed shout of “Still looking good!” while still inside the first 5km however, was more of a relief than an encouragement.

Then we were onto the first indication of whether I had made the right choice of shoe or not. Once you have crossed the river Severn, you’re onto the Severn Valley Way, which can be quite moist. The ground was firm, but bobbly, so I reserved judgement for later in the course, where conditions had previously been worse.

Next up was the slight change in route. This time we avoided the garlic festooned track, and instead went through a car park which led straight to the iron bridge. The bridge is always the point at which you need to put on your “I’m enjoying this” face, for the official photographer. It’s a well chosen point, for its significance, visual appeal, and enthusiastic support provided by the crowds in this tourist hotspot. I then careered downhill, along the uneven crazy paving, playing dodge-the-sightseer-avoid-the-tree. Here ended the easy ride.

With 8km remaining, we made a right turn, onto a perfect tarmac surface. A few of those running within earshot of me were obviously unfamiliar with this course; their sighs and groans of disbelief were quite telling; stretched out before us was the first and toughest of the climbs back to the start. Over the next 800 meters, we would be climbing 82 meters.

Despite the earlier course alteration, we were not to be completely deprived of the smell of wild garlic. It was abundant along the banks of this hill, although the smell was not quite as overpowering, since it was not being crushed underfoot. Once that first climb was over, we had a brief respite for the next 400m, down a similar gradient, passing underneath the railway arches. We then crossed the well marshalled road, and faced the second climb, onto the Rough Park Way trail route.

The following 3km are flat, but have suffered the most at the hands of the weather in previous years, seeing thick mud, ankle-deep waterlogging, and even fallen trees across the track. On this occasion, the churned up mud had recently dried and set solid, and I was feeling surprisingly comfortable after the climbs, so I made good progress.

At the end of this trail section, the final climb appeared, as we went back underneath the railway, and got back onto the Silkin Way where we started. Once the route flattened out, there was just over 2km left to go, and I was five minutes inside my target pace for my course record. Attempts at remembering my mnemonic had ceased after the first climb, but I was now busily trying to calculate the required pace for an unexpected PB.

Distance markers on the course were in miles, but when it comes to pace, I can only think in kilometres, so I relied on my Garmin to tell me how far remained. I tried to step up to the required pace, but was finding myself just a couple of seconds short.

The crowd around the finish line could be heard before they could be seen. A sharp left turn greeted me with the final cheeky little climb, followed by a sharp right turn into the arena. Cheered on by the crowd, I was delighted to see the blue chip-timing mat just a few yards away, meaning that a PB was achieved! I had been misled by my Garmin, which had measured around 300 meters short, so I had been expecting to have to do half a lap around the arena, as was the case before the slight course change.

I sank to the floor in the finishers’ area with a huge grin. But before exiting, it was required to return the timing chip, which had been fastidiously entwined with my shoe. With nothing left in me, this was going to be no easy task, and I contemplated letting them just keep my left shoe. I was making a mental note to ensure that in future, I should attach any chip to my right shoe, such that if I faced the same problem again, I would still have a left and a right shoe in my possession. Fortunately, the organisers foresaw this issue, and had employed numerous “chip-cutter-off-ers” to complete the task for weary finishers.

I grabbed my goody bag and stuffed the very tasty sultana & cherry flapjack down me. There was nothing cheese based to be found, but the excellent technical t-shirt was the colour of Red Leicester. The goody bag also contained one of those stretchy, tubular hair holders / headwear / neck warmer things, and the medal was very good quality.

The only downside to finishing 5 minutes earlier than predicted, is that the people you’ve tasked with bringing your clothes to you at the end, don’t arrive until 5 minutes after you’ve finished. Having the shivers for a couple of minutes was a small price to pay for a result that I was over the moon with! Conditions were perfect on the day, but I wouldn’t quite call this a PB course, despite my result. My improvement is undoubtedly thanks to everyone at BvH, and I look forward to testing myself further.