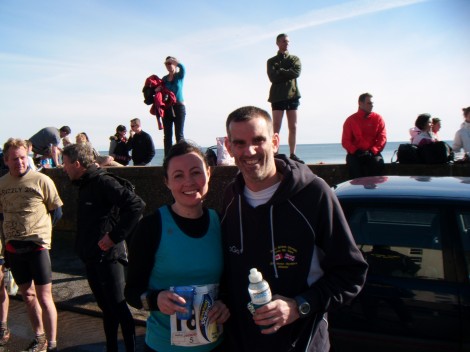 Lesley Pymm reports: This was my 15th Grizzly and, as usual, I enjoyed every moment of it. The sun was shining all day and the views were clear.

This was billed as the hardest Grizzly ever, and it may have been if the weather had been as bad as it sometimes is. What are a few extra bogs and muddy bits between friends? As usual we set off along the beach and the sound of a couple of thousand people crunching their way over the stones on the beach is always amazing.

This year the cub runners were with the main run at the start so there were a couple of hundred extra pairs of feet there. We were not sure until about 9.30 that morning of exactly where we would go next – there was a suggestion that we may have to come back along the beach again as the yacht club was a bit of a mess as there is a new Tescos being built (are they taking over the world?) but we went out that way and just had to be a bit careful. Then it was back along the Esplanade and up the hill towards Beer. There were so many people out to cheer us on, it was great.

From Beer, we climbed up to the caravan site and then over the top and down to Branscombe Mouth where the cub runners turned back along the beach and the main runners turned right and through some very refreshing water before going inland to the village hall and then into woods. There were primroses, wild daffodils and the most wonderful smell of garlic at times and lots of mud.

The first couple of bogs were quite early on, which was good as we were still quite fresh. There seemed to be a very muddy path as well that I don’t remember before. There were lots of musicians out. I passed the Marine who was carrying a 100lb pack at about 8.5 miles (he said that he was beginning to think it was not such a good idea!) He had started an hour before everyone else, so we had already given him a bit of a shout then. I don’t know how long he took in the end.

After another bog, we got to the Fountain Head pub where, as usual, there was a beer festival and a folk group playing – and we had to run on for a few more miles. It was not a bad a the last few years when we have turned right out of there and up a horrid, steep road. This year it was a left and right and an uphill bit, off road and quite pleasant. Back into the woods and heading back towards Branscombe Mouth.

Then it was onto the beach for a longish stomp before climbing up the stairway to heaven. At the top of the cliffs you get the first view of the finish – a couple of miles away – and you can hear the announcements there. Back through the caravan site and the cliff path back to Seaton. After another short bit of beach it is a hundred yards or so along the Esplanade to the finish. It was about 20.1 miles.

Goodies were collected and then the local firemen hosed us down before we went on our way. Next year it will be 25 miles as it is the 25th running of the event so I am looking forward to it already. My time was 5.17.

Sarah Rock adds: It was a lovely sunny day in the village of Seaton on the Devon south coast as I waited on the start line on the seafront for a race with the most daunting name I had ever heard and a reputation to match.

As the town crier signalled the start of the race, I tied my shoes on as tight as possible ready for the bogs, but the first challenge was 50metres after the start when we headed onto the pebble beach for what was the first of no less than four stretches, each being at least a mile long! The ability of this to zap my energy was like nothing I’d experienced before and the first steep hill was actually welcome! After two of these stretches, just to make them more interesting we had to run through the ice-cold sea!!

Hills were the order of the day and the race was full of them, that were so steep that everyone was walking! I had first experienced this in a race called The Terminator two weeks ago, but this was something else – I am too scared to look at my times on my garmin, but I could swear that I actually ran an 18min mile at one point (when I say ran, I actually mean walk, which seemed to still make my calves scream!).

The only respite amongst the sheer horror of this, was the crowd support from the people of Seaton and Beer villages – there were two bagpipers, two men with digeridoos and a band playing in a cow shed, none other than ‘La Bamba’ and when we passed them again Guns & Roses Sweet Child of Mine! The marshalls were fantastic and there were endless supplies of jelly babies. At one point we ran through what appeared to be a pub beer garden and the crowd went mad – only London marathon and Great North Run have similar atmospheres.

Next came the bogs – when I ran The Terminator, I was fearful of getting stuck in the mud – this time I actually did. I was running with a group of men from Bracknell and the most experienced amongst them (having done Grizzly for the last 17 years), saved me by yanking me out! On the second time round, all I could do was pray that my shoes would stay on as I pulled at the rope at the side to keep me upright, as my legs up to my thighs descended into the mud, and each extraction of shoe resulted in a ‘gloop’ sound.

The final challenge was called the ‘stairway to heaven’, although I could think of better names for it!, and was a climb up the cliffs to the top – the views were amazing and you couldn’t help but appreciate them. Then it was a fast slippy descent that made every step impact on your knees, and then a final stretch on the beach. This was horrendous, but we ran as a group and once I got up onto the seafront to run the 100yds to the finish, I had never been so glad to feel tarmac under my feet and managed to do a good impression of a sprint finish 😉

It was then that I realised that I had come in in just under 4 hours (Aaron managed a few minutes over 3hrs) and that that was the longest time I had ever been running in my life! It was a harder four hours than I ever could have imagined but all in all I had the biggest smile on my face when I finished – a lovely day was topped off with a hose down from the firemen in lieu of showers, plus rock (fish) and chips in the sunshine on the seafront!