Alison Davies reports: I felt like a new mum again, with several children about to take their first steps into the unknown! With the huge support from Nicola Mann and Jude over the last few months, these keen but nervous runners embarked on something most of them hadn’t even considered 3 months ago – a 10k race! 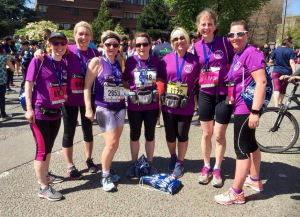 I launched Bourn-Running last September with a typical couch-to-5k plan, and had several beginners who quickly made friends and found a love for running.  Having completed their 5k in December, coupled with questions about ‘what next?’ and ‘can we meet and do more’, an improver’s course seemed to be the obvious next step.  Imitation being the sincerest form of flattery, I decided to model the sessions on the Harrier’s Thursday night training I’ve benefited so much from over the last year or two. After a few weeks, their 5k PBs had improved by at least 5 minutes, with one runner running 8 minutes faster! RunBirmingham had, at the same time, offered some places on the 10k Great Run on May 6th, so most of the group signed up on a bit of a high.

With my need to be on time for everything, the joke in my family is that I will be found on the station platform the night before to make absolutely sure I won’t miss my train.  Sunday May 6th was no different and bordering on adopting this behaviour with several people in tow, we took one of the earliest trains to ensure we had plenty of time for multiple toilet stops. Given the 70s/80s wave we had chosen, I couldn’t help thinking that the ABBA song ‘Waterloo’ would have been so fitting to start the race with (perhaps altering the words of the song to ‘portable loo’?).

There was definitely a mix of nerves and excitement amongst us. For me, my nerves were related to the soaring temperatures that we had not encountered in our training, but I never doubted they could do the distance. As we stood at the start line, I felt so proud of these women in my life and how far we’d come in terms of running and our growing friendships. They have always been an amazingly supportive group and have found running massively impactful on their daily lives in terms of their mental as well as physical wellbeing.   One member of the group had commented that running had been ‘life-changing’ for them.

As we crossed the start line, the excitement took over and the group absorbed the crowd enthusiasm.  Nicky and I planned to run the distance with them all and as the race progressed, I ran ahead with one of the women, whilst Nicky ran with the rest of the group.  With the pace nice and steady, we enjoyed chatting away constantly and had to laugh when my new co-runner piped up ‘do you think we’re running too fast?’  I reassured her that as she hadn’t stopped talking since we started she was doing just fine – brilliantly in fact!’

As we approached the finish line, I felt an increased wave of pride and emotion for these runners and for what they had achieved so far. However, I didn’t have time to ponder too long (phew, I don’t like crying in public!) as we grabbed hands for a sudden last minute sprint to the end.

No stopping, all running, and in the pounding heat – with a result of 1 hour 8 minutes for this newbie runner and her semi-injured assistant! Nicky proudly brought in the rest of the group a few minutes later still smiling and with a definite air of elation! I have to say that I’m a proud ‘mummy’ indeed!

(Bournville Harriers full results from the Great Birmingham 10k will be posted shortly).