For those of you who don’t know, I spend my summers working in the beautiful Glacier Bay National Park and Preserve in southeast Alaska. It’s a stunning place: most of the Park is a glacial fiord with snow-capped mountains rising steeply from the sea, glaciers in the northern parts of the Bay, abundant wildlife (bears, wolves, moose, humpback whales, sea otters, porpoise, sea lions, eagles, salmon, porcupine etc.) and endless quantities of delicious fresh air. The only settlement in the Park is the tiny town of Gustavus, which has 9 miles of tarmac (unconnected to other roads) and about 300 residents (only half of which live here year round).

Of course, being part of the USA, July 4th is a day of celebration, and Gustavus is no different. The main event I’d spotted was the 5km fun run. I haven’t run a race in months due to enforced time out thanks to injury, but I’d started getting back into things with some gentle runs around Gustavus. The running routes are somewhat limited, but there are more interesting hazards out here than back in Birmingham (I saw a rather large pile of bear poo the other day). 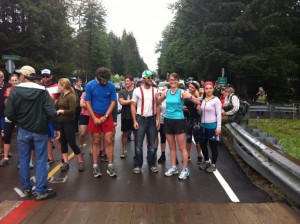 The race started at 12:30 (in the rain). The teal turnout was somewhat limited (yes, I specially packed my BvH vest just for this event), and the rest of the field included a bearded lumberjack lookalike, complete with jeans and braces: very Alaska. As always I started off too fast and rapidly slowed down. The course was really fun: we started off down the tarmac road, before veering off sharply to the right down a narrow footpath. We then had to cross a ditch on a narrow wooden plank, before plunging down into another ditch and scrambling out the other side (so glad I did a bit of XC back home!). We then turned onto some gravel tracks (which are like most of the roads out here) before eventually returning to the tarmac for the last approximately 0.5 miles back to the bridge we started on. The lumberjack beat me, as did quite a few other people (I think I was the 3rd or 4th female), but no one could keep the grin off my face as I once again got to enjoy running after being unable to for far too long. I ran my fastest ever 5km (a little over 23 minutes), although that might have been due to the course being slightly short! 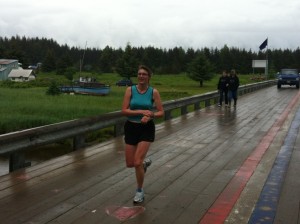 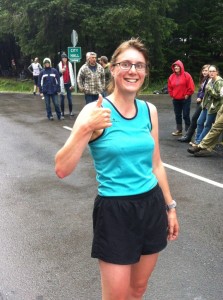 After the race I decided to take part in a very Alaskan activity: the greased pole. Quickly changing into old clothes (I didn’t want to ruin my teal vest) we headed up to the gravel pits outside of town. Here someone had attached a large tree trunk to a forklift truck and several people were busily coating the whole thing in a thick layer of vegetable grease. Once a contestant was sat on the end of the pole, it is raised up and out over one of the water-filed gravel pits. The aim is to slide along the pole (which gets narrower the further you go) and retrieve the $20 stuffed into the end, before falling about 20 feet into the water. I managed to get most of the way in a controlled fashion, before slipping around and shooting off the end at high speed. It was hilarious and definitely should be introduced as a post running race ‘cool down’ activity! (Just don’t let any health and safety officer see it…). 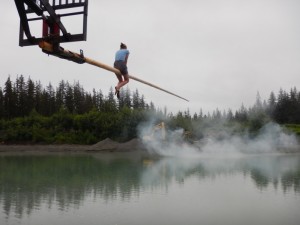 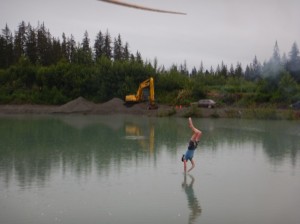