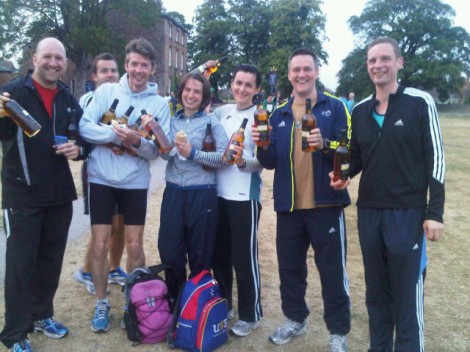 UPDATED WITH RACE REPORT: A mysterious picture arrives in the Bournville Harriers inbox accompanied by the words: “we only run for cider”. It can only mean one thing, the Frampton 10k.

This race is also a GP race, ranking for which are now updated. Will Spanfelner is the first member to reach the 10 event target in the BvH Grand Prix Series. Positions in the top 5 Ladies and Men’s GP rankings are very close with a possible 8 GP confirmed events remaining.

Race report from Mike Scotney:
“So the Grand Prix bandwagon rolled on to this idyllic 10km at Frampton-on-Severn, located a couple of miles from the M5 and Stroud. A big thanks to Ewen, as he picked up Emily, Laura and myself, leaving behind a damp, drizzly Birmingham, only to find a definite notch up of both heat and humidity as we made our way down South.

Arriving in plenty of time we met up with some other members of the teal clan and lined up on the Village Green on a glorious summers evening. The faster runners seemed to be taking it seriously (after all, big GP points on offer!) but it was one of those races where it was almost too easy to enjoy the scenery – great vistas of the estuary and meandering country lanes – and as everyone got into their race pace, it became apparent that this was, indeed, a fabulous course.

It was predominantly flat, with a slight incline at about 2 miles, but definitely fast with PB potential. The marshaling was excellent and after Ewen ‘disappeared’ after a couple of miles I found myself battling with a couple of Gloucester road runners for the remainder of the race. Just as the country lanes ended we headed back over the river and it was an excellent dart back to the finish on the Green.

I was hoping for a slightly quicker time (but training miles don’t lie!) but was pleased with an equal split between the first 5 and second 5km markers (although this suggests I should have pushed a little harder later in the race!). It was then great to watch Laura and Ewen finishing in true Chariots of Fire fashion sprinting for the line, and even better to ‘borrow’ their cider allowance for the post-race tipple of some lethal locally produced apple brain juice!

Fantastic performances all round. Dean, Sean and Gareth were the first Men’s team home (I believe that they all finished in the top 10, which is superb), and there were various other Personal Bests, including those for Ewen, Laura and Emily.

Full results at this link. Bournville results below: