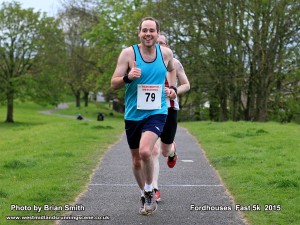 Dave Powner Reports: This race is as close to home territory as I have yet run. Having studied the route in a video on the Wolves & Bilston website, I was pleased that the profile description of “flat” was more genuine than can often be the case.

I walked from home to the race, based at Fordhouses Cricket club. Adjacent to this was my first Sunday League football team’s home pitch. We got thrashed every week, and got relegated. Hopefully my sporting prowess in the area would even out slightly today.

The start line was just outside the south exit of the club. There was a playground just here that I used to frequent during my lunch break at school, which once ended up in a visit to A&E. In a test of endurance, I had clumsily disembarked from a spinning roundabout, and got my foot wedged in between the tarmac floor and the wooden underside of the feature. The roundabout came to a grinding halt, and I lost a toenail. Hopefully my sporting prowess in the area would even out slightly today.

This intimate race had almost 100 competitors, and was not chip timed. So despite the thin canal-side path, the more eager runners lined up approximately 25 abreast at the start line. I ran the first 400m on the grass verges, but they were in good condition, so this was not a problem, and we were soon spread out thinly enough to run comfortably on the tarmac.

At the 1km mark, we were off the Staffordshire & Worcestershire canal, and onto the Shropshire Union. At 2km we faced the grueling climb to leave the canal. It lasted about three seconds. We were then directed through the centre of Pendeford, and even at this early stage, I had concluded that the marshaling featured the most positive encouragement I have ever experienced. Even tactical advice was offered, despite that fact that I was for once an outsider on this patch, where my progress up the order would likely be to the retrogress of one of their own, as Wolves & Bilston provided 50% of the competitors.

I began to struggle in the fourth kilometre, my legs still weary from the half marathon a few days earlier. A hairpin bend took us off the road and back onto the canal-side path that we started on. Inside the last kilometre, I got a shout of “Come on Bournville” from the official photographer, the second time in this short race that the teal had been recognised.

I turned the final corner to see that the finish line was slightly closer than I expected. So I put on a sprint finish, and my official time was voiced to me. I had matched, to the second, my PB that had stood since 2011!

A cotton t-shirt was provided to finishers, of a style which is actually wearable in non-running situations. It’s worth emphasising that the marshaling was excellent. The only problem with this event is that in order to register in advance, you need to send a cheque through the post. It’s a great little race, and I was extremely pleased with my time. My sporting prowess in the area had evened out slightly today.