After a few recent race disappointments, and general frustration at feeling increasingly slow plodding around the pavements, it was time for a challenge. A fit of madness one evening some time ago lead to Simon and I entering the Endurancelife Gower Half Marathon. This race is part of the Coastal Trail Series, a selection of challenging coastal races which are graded from ‘moderate’ to ‘extreme’. The Gower was graded as ‘strenuous’, so sounded suitably tough, without being near-impossible. Having looked at the route map and race profile online I was pleased to see a ludicrous course with some insanely steep hills and a stretch of beach. Perfect: no danger of a PB, therefore no danger of that crushing disappointment when you realise you are way off target. The only challenge for me was to complete the course and not come last!

Race day sneaked up on us stealthily and all of a sudden I realised it was the day before I had to fight with big hills and bogs. In the car we jumped and headed off to Wales for (in the words of Jude) a ‘mini-break’. We arrived in darkness, so there was no indication of the general shape of the land (did that hill really exist?!) until the following morning when we turned up at race HQ (slightly grumpy after having to pay £3 for car parking which was originally promised to be free). The registration was slightly chaotic and owing to multiple races starting at different times (an ultra, marathon, half and 10K) something went wrong and our start was delayed by half an hour. Never mind, this was extra time to try and digest the Mars Bar I had decided to devour in the hope of some sugar laden energy…and to go to the toilet ‘one last time’ 100 times over.

The race started with a briefing in a tent in the field where we would start. The briefing was amusing and informed us that if we didn’t carry the recommended kit (500ml drink, first aid kit, mobile phone, hat, coat etc) we would be disqualified. This would be a bit over the top in your average race, but in this event where there are only marshals at the two check points you have to be somewhat self-sufficient. The race started in two waves: the mass start for anyone who was in it to win it (which Simon, being quite speedy, opted for). Those of us who run at a more sensible pace started afterwards in ones and twos. There was no danger of missing valuable seconds off our time as we all had to ‘dib’ in with the little plastic dibber we had tied around our wrists. The gradual start prevented any hold ups on the narrow path, and worked very well.

Soon after the start I found myself at the bottom of a very imposing hill, which I had been trying to ignore by admiring the sea views we had been treated to for the first stretch. The hill reduced everyone to a slow walk as it was incredibly steep. My legs were burning within a very short amount of time, but instead of feeling despondent as I have in recent races, I concentrated on enjoying the views and laughing (in my head) at the sheer ridiculous nature of this course. At the top of the hill a photographer lay in wait to capture some truly hideous photos, before we were able to start to move in some semblance of a run as the path flattened out gradually. The best was yet to come: as the saying goes ‘what goes up must come down’, and this couldn’t have been truer with a tremendous downhill to follow the steep climb. Pushing all sane thoughts aside I threw myself down the slope and trusted my new trail shoes to grip as I flew down the slippery grassy hillside. It was a deliriously fun descent and I even managed to overtake a few more sensible runners who were taking things carefully (for the duration of the race you could spot various muddy bottoms from those who had slipped here). This was probably the fastest I ran during the whole race, and it was one of the most fun parts.

After this the route twisted and undulated until we got to a caravan park and a section over some dunes. Running on dry sand is very energy-sapping, but I resisted temptation to walk and plodded at a slow trot up and down the dunes until we came out on to the beach. I was expecting the beach to be one of the hardest parts as it was over a mile of sand to cross, but thankfully the sand was damp and packed hard enough to feel as if we were running along a pavement. Although my legs were sore the sea breeze was refreshing and the view magnificent, which took my mind off the next few hills, at least temporarily.

After the beach we climbed up again before dropping into another caravan park. Shortly after there was a check point and then a steep, slippery, stony track before we hit the second major hill. At this point I was running (walking) with a small group of other people, so I took the opportunity to whip out my emergency jelly babies and offer them around (now that sort of camaraderie doesn’t happen on a road half marathon!). The sugar boost helped the long slog up the hill and I realised that we were finally over half way.

Skirting the edge of the first big hill (but still managing to pack in some serious height gain) we headed straight through a very long bog. I thoroughly enjoyed this section and I even managed to overtake one or two other runners. Within a very short stretch my shoes were soaked through, but it was fun hopping and skipping over (and into) a selection of puddles and mud. I survived the bog and almost gained the last stretch of tarmac, when a bramble leapt out of nowhere and grabbed my toe, sending me almost head first into a ginormous puddle. I saved myself just in time, but not before I had soaked most of my legs and arms. Time to wake up and concentrate on forcing my tired legs to pick up a tiny bit of speed along some lanes (tarmac felt very strange after the bog!).

I was under the impression that the course was 14.4 miles (as stated on the website) so I was surprised at mile 12ish to see runners returning to parked cars. All of a sudden I turned a corner and saw the race HQ and someone was shouting “it’s only seconds to go!” Focussing my attention on the man in front who had had the cheek to overtake me as I was battling with the bramble and puddle I forced my legs to move faster and as we turned into a narrow path between hedges I managed to pass him. The path seemed worryingly long and for a horrible moment I thought the extra mile we had left was going to be added on here and I had been stupid to speed up then…but thankfully I turned a corner and there was the (13.3 mile) finish line. A brief ‘sprint finish’ and I was across the line at last!

Simon had finished almost 40 minutes before me, so was there with a warm fleece for me to put on and to help me into the tent to collect my medal. A cup of tea later and lots of dry clothes and I felt almost human again. This race was an epic challenge and has renewed my enjoyment of running, despite it being my record slowest half! The views were stunning, the weather held out and didn’t rain, and the route was tough, but rewarding. All in all, a great ‘mini-break’ and just the running boost I needed. 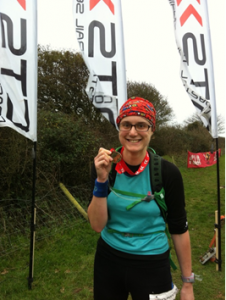 4 Replies to “Leonie Clitherow reports on the Endurancelife Gower Half Marathon, Nov 16 2013”