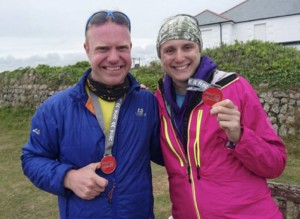 From Leonie Clitherow: The Classic Quarter was my ultimate running challenge. Having grown up in Cornwall, the opportunity to run a significant proportion of the Cornish coast path, from the most southerly point (Lizard) to the most westerly (Lands End), sounded too good to miss. However, I’m not quite sure what my thought process was when I realised it was 44 miles, especially when I’d never finished a marathon feeling like carrying on for another 18 miles!

Race day dawned early: hideously early. We stayed at my parent’s house in Truro the night before, and somehow managed to convince my dad to get up ready for a 4am drive to the start line at Lizard Point, ready for registration between 05:00-05:30. The start line was swathed in fog when we arrived and the fog horn at Lizard Lighthouse was blaring loudly whilst we ate our pre-race breakfast (three pain au chocolat, two bananas, and half a bottle of Lucozade). Not long after arriving, I checked my rucksack and hydration pack and found that the hose attached to the Camelpak style container was no longer sealed and was steadily leaking away. This was certainly not going to work for the race! Instead I had to make do with stuffing two Lucozade bottles (one with water) into my backpack. I started nervously worrying about what else could go wrong…

Race briefing started just after 6am, and the race began at 06:30 (I was delighted to notice that the pre-race toilet queue was rather different to normal: it was the men having to wait in line whilst us ladies could skip straight in…this was definitely a male dominated event!).

Immediately after starting, the route narrowed and began to climb up hill. My race plan (based on having never run further than 27 miles) was to walk up every hill and jog the flat and downhill sections to conserve energy. Luckily plenty of other people around me had similar ideas, although Simon seemed to be running everything and soon disappeared off into the distance. The first few miles were uneventful, and the views were lacking due to the fog.

The hills were relentless for the first half of the race. At 16.5 miles my mum was waiting on the path, handing out slices of melon (best mid-race snack, especially when it’s hot and sunny) and pieces of chocolate to passing runners. I stopped briefly for a drink of water (my Lucozade bottle was running low). Apparently I wasn’t the only runner to have a hydration pack malfunction, mum had already helped another runner who was running low on fluids. I was beginning to feel tired by this point, and although I was keeping just above 4 miles per hour, I was starting to worry that I would be finishing in well over 12 hours, or worse, that I wouldn’t finish. Mum informed me that Simon was about half an hour ahead at that point, so it was unlikely I’d see him again until the end!

Temperatures rose steadily as the fog lifted, and it was a battle to keep hydrated. The coast path is often swelteringly hot as the dense hedges create pockets of humid air. The breeze was minimal too, so I stopped at every check point (roughly every 10 miles) to top up my water bottles. I knew I needed to keep eating to keep my energy levels up, but it’s something I struggle with whilst running. I managed to eat four jelly babies before half way, but relied on the sticky, sugary Lucozade to keep me going.

The half way point took a long time to arrive. This was made worse by spotting a marquee in someone’s garden, which I was convinced was the half way rest stop, but I had to wait a few more miles for the real one. At half way (exactly 5 hours after starting) we were able to pick up our bags which we had left at the start line. I knew it was very important that with another 22 miles still to go, I desperately needed to eat something or I’d never cross the finish line. I managed a few mouthfuls of pasta and a packet of crisps at this point (with the high temperatures I was in need of as much salt as possible), and I was also able to refill my water bottle and pick up a new Lucozade from my bag. Mum met me again just after the half way point where I was walking to help settle the food in my stomach, and told me that Simon was still running well ahead (mum had by now gained the friendly nickname of the ‘melon lady’ by various runners).

After the half way point the route became much flatter, but by no means easier. There is a long stretch of the coast path from Marazion, through Penzance and Newlyn to Mousehole, which follows the road and is consequently all on tarmac. I knew this was going to be tough on my legs, but I didn’t realise quite how painful it would be on my feet. I managed to get through this with a combination of jogging, speed shuffling, and walking.

Around 35 miles into the race (and by this point further than I’d ever run before), I became hopelessly emotional. I don’t know what it was exactly, but I found myself sobbing as I stumbled across a rocky beach, probably due to a combination of sheer exhaustion and the incredible camaraderie of fellow runners checking each other were OK as they passed. The next few miles were a blur of incessant hills, tears, endless steep steps, and wobbly legs.

Mile 40 took a long time to arrive. I reached a check point which I had convinced myself was the final one at mile 39, but instead it was at 33 miles. My Garmin watch battery had long since died by this point and I was using my bike computer instead, but this was bulky and tucked into my rucksack, so I couldn’t easily see how far I’d run. Eventually, after a torturous climb up the steepest possible steps, past the Minack theatre, I reached the 39 mile check point (actually 39.8 miles, so significantly less than 5 miles to go). I refilled my water bottle, swallowed the last tears (I was too tired and dehydrated for much more emotion after that) and wolfed down some very salty, very welcome crisps.

The last few miles were a battle to keep going. My legs didn’t hurt in the same way as if I’d run a shorter race at a fast pace, instead it was a case of a creeping exhaustion that made it hard to keep pushing one foot in front of the other. Suddenly, out of nowhere, I spotted the hotel at Lands End. It was still far off in the distance, but the sight of it made me realise that I was going to finish this after all…and quite possibly in significantly less than 12 hours!

Eventually the ‘one mile to go’ sign appeared and, despite it being at the bottom of a hill, I somehow dredged up my last reserves of energy and ran (yes, actually ran, much to my own surprise). At the top of the hill a small crowd had gathered to cheer us on, but the finish line was nowhere in sight… I spotted Simon, cheering, and then someone pointed me in the right direction of the end, tucked away behind the crowds. The very last couple of metres were over a technical rocky outcrop, and desperate to not fall over at this very last hurdle, I slowed down. Absolutely exhausted beyond anything I had ever felt before, I stumbled across the line in 11:23:49, the 141st finisher. Simon completed the race in an impressive 10:26:17, coming 86th out of 213 finishers (265 people started, one person was disqualified for not carrying the mandatory kit, and quite a few had to drop out).

I’m now on the lookout for the next challenge…recommendations welcome!