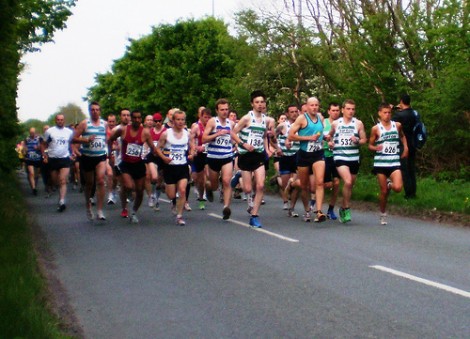 Mike Scotney reports: My satnav has a sense of humour! Winding around the hotspots of the Black Country and Dudley, detouring around every roundabout in the area, I wondered if I was going to make it to the start line.

However, following a train of cars into Dudley Kingswinsford rugby ground, it was evident that again a large number of runners had been attracted to this midweek event. This was my second year of running in the race and I can honestly say that it’s a real highlight of my running calender although it’s not the quickest of courses.

We were shepherded down a country lane and with chip/RF timing started in ideal conditions, a little cool and with a tailwind behind us. I started with Ewen, Paul, Andrew and Nicola, and there was a very decent BVH teal turnout. It was a little congested for the first kilometer but spread out over the ensuing hill and we then hit the country lanes on the way to Kinver and Enville.

I was aiming for a steady 7 minute miling but was surprised to hit the half way point in just over 20 mins, nearer to the 6.30 p/m pace. The long twisting country lanes kept the race scenery interesting and with a large volume of club runners there was always another group ahead to try and latch on to.

The marathon training was really paying off (or was it the teal laces?) and feeling quite strong managed to make the last two kilometers after the looped mid-race circuit, my quickest. Psychologically it always seems better counting down in KM’s rather than miles, and the final ‘flat’ lane and sprint to the finish back to the rugby club was good.

We then received a very welcome banana, Red Bull shot (no vodka though) and technical T-Shirt, and there were some excellent BVH performances and a number of well beaten PB’s including those for Andrew Hoole, Nicola Cumley and Fiona Heath-Brown. I was pleased with a time of 41.10, an unexpected PB in light of a lack of any speed training, and a great incentive to train really hard for the short-race season ahead.