Mark Cooper reports: When I decided to enter this event at the beginning of the year, it seemed like a really good idea – where else would you want to do 4 races in 4 days other than under the sunny skies of Cyprus in November? 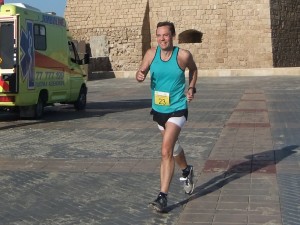 As the date grew closer and the nerves set in, I was starting to question my sanity on this one…so here’s an attempt to do justice to this event, now in its 8th successive year.  This time around, 150 runners entered the event, with competitors from all over Europe, mainly Germany and the UK, but also Norway, Sweden, the Netherlands, Italy, France, and a strong contingent from the local club, Paphos Running Club, a number of whom I’d trained with on a previous holiday to the area.

We journeyed as a family to Cyprus, staying at the Aloe Hotel in Paphos.  Having arrived late on the Wednesday evening, there was time for little more than a light dinner and bed before getting to the Race HQ at the Coral Beach hotel for 11am on Thursday morning, about a 15 minute taxi drive from our hotel.  For races 2 and 3, the day began waiting for the hotel restaurant to open at 7am for a light breakfast of fruit and porridge before jumping in the taxi once more.  On Day 4 I was able to use the gentle jog from our hotel into the harbour as part of my warm-up for an 8.00am start to the last event. The 4 races themselves  were as follows;

Day 1 – a 6k time trial – runners set off in 10 second intervals (and in simple race number order) and its down to personal judgement as to how well you do.  I was quite happy at race number 23 to finish this leg in just over 28 minutes, having passed 6 runners and only being passed by 4.  This started at 3pm from outside the Coral Beach hotel, and I passed some of the quiet time between the Runners Briefing at 1pm and the start of the race listening to one of the organisers trying to explain to a rather confused German competitor why he referred to the back of the hotel as the front!  During this ‘down time’ I also met a number of UK runners, who all recognised the Bournville Harriers name on my jacket, and introduced themselves as being from clubs such as Halesowen AC, Centurion, Spa Striders amongst others.

Day 2 – an 11k Hill Run in the Akamas Nature Reserve – in my opinion, the word “hill” doesn’t do this justice!  Starting ar sea level, you climb through the nature reserve for the complete 11k, ending up just over 600m higher than where you started, in the beautiful little village of Arodes.  The sting is in the tail of this one, with the steepest climb reserved for the last couple of hundred metres before you enter the village square.  I arrived at the finish just over 1 hour and 22 minutes after setting off and I have never been so glad to see a bottle of water!  The friendship and support between runners was starting to shine through on day two, as each competitor recovered from their own run and turned to provide invaluable encouragement to those runners still climbing into the village…a great sight.

Day 3 – a Multi-terrain Half Marathon – my favourite of the four events – started with an 8am journey in a series of minibuses to the start of the race at Smiges Picnic Area.  This took approximately one hour and went to the very north of the Akamas peninsula before turning back inland and climbing to around 300m to the start.  If the scenery at the picnic area wasn’t enough to justify the journey, then the breathtaking views across both sides of the peninsula during the first half of the race definitely were.  As we climbed towards the top of the Akamas range, you could look down both sides of the track and the bay around Latchi and Polis on one side and small sandy coves on the other.  The stillness and quietness were amazing and I was only grateful that the climb during the first 10-11k of this half marathon gave me the opportunity to run slowly enough to absorb the sheer beauty of the surroundings!  Having started at about 300m above sea level and knowing that the race finished on the beach, even I could work out that the second half of the race was going to be a bit of a scary downhill dash – and so it turned out to be!  Very rocky and uneven in parts and very, very steep!  Still, it was nice not to be running uphill for the first time since day one!  I was surprised that I had felt so good at the start of the half marathon (perhaps there’s something to be said for this training lark after all!) but with 2-3k left to go, I was starting to really struggle for the first time.  But as the last section of the race opened out in front of me, for some way ahead leading to the finish line I could the beach and the sea and the opportunity to join those already lucky enough to have finished for a cool, post half-marathon dip – so I wasn not going to stop and walk now!  And, take it from me, every half marathon should hinish like this!  And, afert a swim and another long bus journey back to the race HQ, there was only the last race to go – the Paphos 10k – surely that would be easy now?

Day 4 – Paphos 10k – starting in the harbour and basically heading out in a long loop before turning back along the seafront past the main hotels and the shops, cafe’s and restaurants before finishing in the harbour itself.  Now earlier in the week, I’d taken the opportunity when speaking with other runners who’d done the event before to ask them which of the 4 days they had found the most difficult – and each one had agreed it was the last one.  Now I couldn’t really understand this; the 10k was quite straightforward, only had one slight climb between 2-3k and was only really good road surface throughout.  In fact, I felt good at the start and was running really well, enjoying the warm early morning sunshine heading out from the harbour.  However, reached about 8k on the return and then “tank empty” signs came on in the brain and the legs and I just don’t know how I kept running for those last 2k.  But – I was determined I wasn’t going to walk past the family (this was the only race close enough for them to turn up and support me) whatever my legs said!  So if you’ve seen any of the photos of me on Facebook running the last 100m past the fort to the finish line – don’t be fooled – that isn’t a smile!!  But, what a fantastic feeling at the finish – just cannot describe how it felt to have completed the 4 days, the 4 races, over 4 distances and some extremely difficult terrains, covering around 30 miles in total.  Now I am not a great drinker and never in the morning – except at 9.00am on Day 4, when an ice cold glass of the local Keo lager was probably the most beautiful drink I have ever tasted!  And what a way to finish – great music, free beer, some new friends from across Europe, and a couple of hours to share stories of the whole event with fellow runners under the beautiful Cyprus sky – would I do it again?  Definitely!

The statistics – in case you’re interested in maybe giving this event a go at some time, here’s some of the highlights from this year’s event;

There were 150 runners starting the event, of which 142 completed all 4 races.  The winning times were as follows:

Overall, a fabulous four days, really enjoyed the running, the spirit and friendship amongst all of the competitors, and of course the beautiful Cyprus sunshine!! 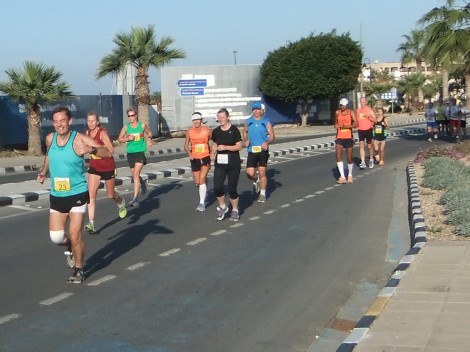