Sara Rock reports: Seven Bvhers headed off in below zero temperatures to Croome to tackle one of Runners World’s top rated trail races – the cold plus tired legs from cofton sessions or masters cross country relays the day before meant talk on the journey was less than enthusiastic – until we saw the beautiful grounds of this national trust property. 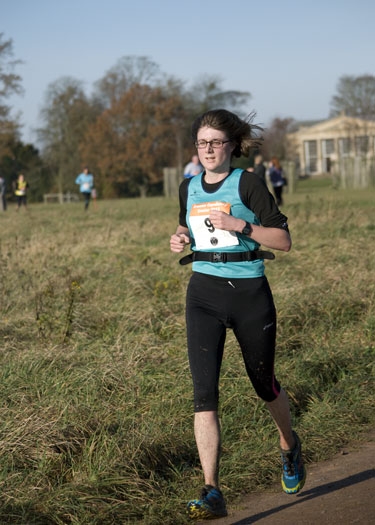 The location of the race start is engineered for one purpose only – to make it hard! Basically you walk down a big hill to the start and then spend the first few minutes of the race running back up it! There is then a downhill section and you head out on paths around the grounds, taking in the wonderful scenery and then out into the fields, up a few more hills.

At the top of one, it was still so cold that the grass was all frosty white and sparkly in the sunshine, despite being out of breath, I couldn’t help but marvel at how wonderful it looked.

There is then quite a lot of running round what I had perceived in our warm-up-reccy as ‘lakes’ (but actually turned out to be waterlogged fields!) and every single step was an energy-zapping ‘splosh’ or ‘slop’ though boggy, muddy grass.

There was a ‘water feature’ but it was not very deep by Senneleys or Suicide Six standards but a few sheep crossing the course to make up for it! The chat I had en-route with an Evesham Vale runner who commented on not only BvH’s big turnout, but also our braveness in wearing just vests and shorts in the frosty conditions, was a prime example of how well supported and friendly this race is.

The latter part of the 6.5mile race is through wooded areas, with lots of twists and turns and without anyone visibly in front of me, I had to slow down to navigate the arrows amongst the trees. Linda (who was some way in front of me) suffered from this aswell and others behind us gained some ground, including the third lady who I had passed a bit earlier.

This is when you really appreciate race supporters. The last section of the race is basically back up a gravel path to the top of the steep hill that we ran down at the start – I knew this would be a killer. As I came running back into the grounds , a Malvern Jogger confirmed that there was a lady 20 seconds behind me and this gave me the motivation to tackle the hill with gusto.

However, about half way up it, I was struggling not to give up and walk, when Stu (who had just won the Male vet’s race) appeared and told me to take my time, I had 50yds grace and so I relaxed and managed to hang on to the end, nearly collapsing when I got across the line and for the third time in as many races, being asked if I was OK by the marshalls! 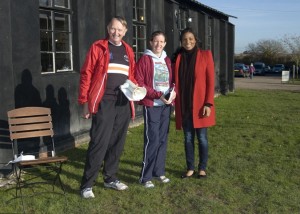 Linda was already home as female race winner, and Julie was not far behind me. Leonie and Anthony who are new to BvH had great races, both looking really strong coming along the finishing straight. Lesley yet again showed her characteristic endurance by racing on two consecutive days.

I was a bit disappointed to find the ladies vet category was over 40 and not 35 and so I missed out on a fashionable pair of race sunglasses!, but with two of the four prizes going to Bvh and a free cup of tea and flapjack (kindly provided by Mike), it was a very successful day for BvH.

Lesley Pymm adds: There was a smattering of teal at the Capability Canter this year. This is a run in its’ third year now, and gaining popularity as it gets to be better known.

It has an uphill start and finish, but apart from that is pretty flat really. This year, thanks to the recent rains, it was pretty muddy. I was a few minutes slower than last year, but not surprised as it was a bit gloopy in places.

It was a lovely day, cold with wall to wall sunshine. The event takes place at Croome Park, a National Trust property with landscape gardens designed by Capability Brown.

Stuart Pearson was 4th overall and 1st M40. Linda and Stuart won entries to next years event, so we’ll all be back there doing it again then – come and join us!!

There was another BvH runner who I think must be very new. He did not show on the entry list or results as BvH, and his vest had the folds in it, so I think this may have been its’ first outing! I don’t know your name, but well done!