I’m currently training for the Rock and Roll Marathon in Liverpool at the end of May and, having realised that most longer races appeared to be geared towards those running earlier spring marathons, had some trouble finding something to break up the monotony of those long runs at the weekend. I spotted the Downland Challenge on the Runner’s World website and decided to combine it with a social trip to visit some friends. So, after a pleasant catch-up in Oxford on Good Friday and a overnight stop-over, I had an early start to head down the A34 to the race HQ at a school in the village of Compton.

The race itself was actually two separate events – the 20 mile trail race comprising one loop through the Berkshire Downs which I had signed up for, and a 40 mile event for the very committed which involved two laps of the course. All the runners assembled for the pre-race briefing where I overheard a number of people mention that the course was “quite hilly”, but whilst I was trying to work out what this actually translated to, the countdown started and we were off for the customary lap of the sports field before being directed out across the first of many footpaths.

Despite the weather over the past few months, the fields were completely dry and, coupled with the sunny weather, meant that the biggest issue was dust blowing back from those in front. There were a couple of sections that were quite rutted where you had to watch your footing but I managed to make it through relatively unscathed. Thoughts turned to my hastily assembled pre-race plan of checking whether any runners I caught up were doing the full 40 mile race and if so, trying to get past them. This seemed to work, and I made it to the first checkpoint feeling in reasonable shape.

The course quickly turned to a proper trail race, following chalk markings as we headed into a succession of woodland. At this point I was running on my own so hoped that no-one had tampered with the course to leave me wandering aimlessly around Berkshire for a few weeks. Thankfully the fear was short-lived as I met one of the many friendly marshals who waved me on encouragingly. After a few more local landmarks including, somewhat randomly, a light aircraft hangar I reached checkpoint two.

It was a pleasant surprise to find a particularly impressive spread waiting for me: a selection of drinks and sweets including (as those who were sat with me at the Awards Evening can attest) my favourites, UFOs. I grabbed a couple a Jaffa Cakes and a handful of jelly beans to keep me going and set off again, only to run into the toughest part of the course – a couple of very steep ascents in quick succession.

I made a valiant attempt to run up the first one, but as soon as I saw that the second climb was mostly steps, I conceded defeat and walked to the top. Thankfully the course levelled out and I was treated to a fantastic view across the Downs as we crossed the highest point of the route before a rapid descent through a field and more pitted trails to the final checkpoint for a quick drink to help in the last push.

The last few miles were a tough slog, I could see Compton below me as I criss-crossed bridal ways but it stubbornly refused to get any closer. Slowly, after what seemed like an age, the paths became firmer and the trees cleared as I finally turned under a bridge to enter the village itself. The last marshall pointed me across the village green for the last hundred yards, and before I knew it  I had entered the school grounds to a smattering of applause and crossed the line pleased but exhausted in a time of 2:40:50 for 21st place.

As I got my breath back and cheered on the other runners (especially those taking a left turn to do the second 20 miles) I was offered a choice of fruit juices to rehydrate and, more importantly a Creme Egg, both of which I accepted gratefully! Even better, in keeping with the school setting the canteen had been opened to give out free food to all runners so I could enjoy sausage, chips and beans before heading home.

This really was a fantastic race, tough but very rewarding. I take my hat off to everyone who did the full 40 – just the thought of doing some of the hill sections again was enough for me. More importantly, congratulations to Compton Harriers for putting on such a well organised event. It’s probably too far away to be a regular on my calendar but as free camping is on offer for runners the night before the race, I may be tempted again in future… 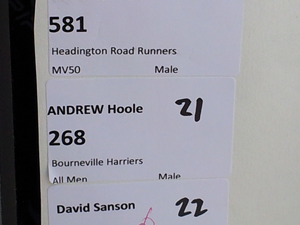 (Instant Results service – shame they got the club name wrong!)