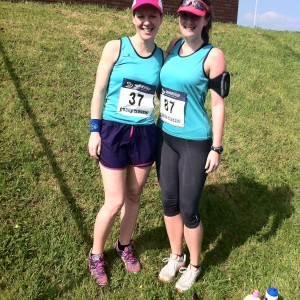 Having missed some of the season so far through a combination of injury and life in general, I was looking for a local 10k and this one fell on an otherwise uneventful weekend in May. It was also close to my Aunt’s, who I’ve been “encouraging” through her NHS Couch to 5k programme and who was easily persuaded to enter the 3.5k Fun Run taking place in the same location as a test of her progress. Fellow BvHer Katie Thomas was roped in at the last minute having asked on Friday if I fancied joining her for her long run a week before the Liverpool Half Marathon; she somehow ended up as the designated driver for a little road trip and a hard 10k on a beautiful sunny day.

We arrived early at Old Halesonians Rugby Club, for the race organised by Cobra Running Club, in plenty of time for Katie to register and to watch some of the fun run which comprised 32 runners, including a very impressive junior, Lily Higgins, from Halesowen Athletics & Cycling Club, who led from the start and finished in 11:04. One to watch!

We then set off at 10:30 and in spite of the breeze it was already starting to feel a little warm, but after a short climb I was pleased to find the course levelled out and was quite manageable. I’d planned to run entirely on feel, knowing full well I wasn’t in PB shape, given my recent parkrun performances, and having an idea that there was at least one interesting hill on the course.

The first 5k was along the main roads, and a nice steady flat/downhill section, with the only challenge being in avoiding the nettles and settling into a steady pace along the narrow paths where passing other runners would have been difficult. The marshals throughout the race were very well organised, with good control of the occasional traffic and lots of encouragement. At about the 3k mark one said “Good work Bournville” and I heard Katie’s trademark “whoop whoop” behind me so I knew she was close and making good time, especially given it was a training run for next week’s half-marathon.

There was a water station at 5k and I felt happy that I’d reached that point in a reasonable time and feeling comfortable, albeit challenged by the onset of hayfever, which made it a bit difficult to see (not to mention breathe!)

Just after this point I rounded a corner and saw THE HILL in front of me; I tried to tell myself not to look at the top, to use my arms and push through, but I confess it really got the better of me. After initially giving it my best and even passing a couple of other runners I started walking… The next 3k was dreadful! The heat suddenly felt oppressive as the breeze died down and there was no shade, but the hills were the real problem and I found my lack of fitness was really starting to tell. The marshals were almost apologetic as each turn seemed to prompt yet another climb and there were very few other runners around.

At around 8k the road section finished and there was a downhill stretch across a farmer’s field – which was respite from the hills and oppressive heat, but the hard, uneven surface was far from easy to negotiate, and quickly turned into yet another climb. Passing another marshal I commented that it was definitely a “Yorkshire-tough” course as I’d already decided it was the hardest 10k I’d tackled, eclipsing last year’s Horsforth 10k. Later the Race Director told us that people don’t often return for a second year, and I’m really not surprised!

Back onto the road for the last mile or so, I looked at my watch and knew I could still make it back in under an hour, so, thinking of the cake and coffee at the end I pushed myself on and finished in 58:58. Nicely symmetrical, if you like that sort of thing. I was presented with a lovely square medal for a change, and announced to everyone that I would not be returning. My Aunt, fresh from her 3.5k Fun Run, and who I’d been hoping to inspire with my running, looked horrified as she thought there was a good chance I was about to be sick!

Katie crossed the line shortly after in 1:04:17 with a look on her face that was reminiscent of our last outing together and said “Marston, why do I let you pick the races?!” Our fellow BvHers had done so well at the Masters Relays on Saturday; we laughed that the under-35s (only just in my case) had not performed quite so well in Team Teal colours today, but we were mainly glad to finish and to represent our club.

Presentations, coffee and cake followed in the club bar, and the Race Director asked if anyone could stay on to watch the last runner finish. They’d kept the race open for a lady in her 60s who had run the course in a previous year in a respectable time, but was struggling on this occasion, having been involved in an accident in the past year. Her determination to finish was good enough reason for us to stay around, and, when she crossed the line after 2 hours and 17 minutes I reflected that she had probably tried harder than anyone on the day, and how runners at both ends of the field are sometimes just as inspirational as each other. 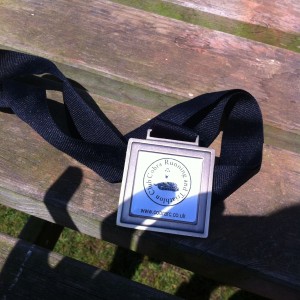 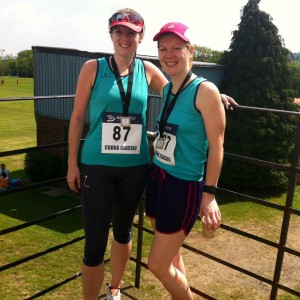