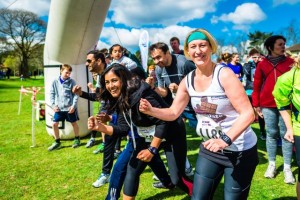 Nicola Mann Reports: The Chocolate 5k is a charity fun run in support of St Mary’s Hospice, and takes place three time
s during the year: at Bournville, Sandwell Valley Country Park and Dorridge. Along the route, runners pass 4 ‘stations’ where they are handed an assortment of  chocolate goodies and afterwards there are further heavenly delights in the form of a chocolate fountain.  Being a chocoholic, signing up was not a difficult decision, and I naturally plumped for the Bournville venue, my local neighbourhood.

My intention was to run Cannon Hill hard that morning, then by means of bus and additional running, rush over to Rowheath Pavillion for the 11am start.  In the event, I woke up too late to put these logistics to the test so had plenty of time to register, catch up with a friend also running and chat to Linda Goulding and Lynda Batchelor, 2 of the 5 BvH who were marshalling that day.  As I’d missed CH, I decided to go all out for a decent time, rather than the leisurely run originally planned, so lined myself up at the front of the start with other like-minded runners.

And then we were off. Within seconds a few speedy kids whizzed past me, along with some of the more competitive adults. I resisted the temptation to try and catch them……..and potentially blow up after 500m, so settled for a steady pace I knew I could maintain. The route which had started on the grass slope in front of the Pavillion, headed first towards the lake and then around the path to the right, and out onto Heath Road and right towards the traffic lights. By this stage I was comfortably into my running stride and was a little perturbed to find the pedestrian crossing had turned to red. Resisting the urge to sprint across the road, I waited as patiently as I could for what seemed like an age , although probably only for a few seconds.  The route then backtracked on ourselves continuing along Heath Road down the hill. By now the runners ahead had disappeared into the distance, but it was nice to pass Laura Gale who encouragingly told me I was first woman. And then it hit me…..I wonder if I could maintain that position until the end. I looked behind me…..there were no other female runners in sight. I tried not to get too excited…there was 4km to go, and although I hadn’t studied the route map beforehand, I knew there would be an inevitable hill near the end, which I’d be vulnerable on.

The route then took a right into Woodlands Park, which I remembered well from the Beginners Course last year. Unlike the Beginners Course, which saw us  turn right up Teazel Avenue and then the steep hill up to Rowheath Playing Fields, I was relieved to carry along the flat path until we reached Bournville Lane, where we headed off towards the duck pond

By this stage, I’d passed a couple of chocolate stations and was busy trying to transfer the chocolate treats into the pump bag we’d been given, the coordination of which I found a little challenging when trying to run at speed.

I had also caught up with one of the runners ahead of me, and we were to remain within a couple of metres of each other ….swapping positions and even running alongside one another, and having a brief chat.

Running along the path just to the left of the duck pond we then cut back to cross over Woodbrooke Road, and followed this road up the small hill, before turning right down Thorn Road and a pleasant downhill stretch into Bournville Park. I was still feeling strong at this stage, no other runners had past me since Rowheath, and there was now some distance between myself and the guy I’d originally caught up with. I felt boosted by passing a couple more BvH, Stacey and Katie, who were marshalling. I’d also been looking around at regular intervals and was pleasantly surprised to see no other female runners within sight and from my GPS, knew I only had 1.5km to go.

And then at Bournville Park, things started to go pear-shaped. I missed the call from the marshals to go straight up the hill on Beech Road, and tried to take a path on my right instead. A few metres in, realised I may have gone wrong, backtracked down to where the marshals were, who redirected me. By this point the guy had now caught up, and was making good progress up the hill. Silently cursing my inability to run AND follow instructions, I chased after him, and despite having to walk a few paces , had overtaken him by the top of the hill. By this time I was spent and the last km was tough. By the time I’d headed left along the path by the car park and right around the lake and into the finishing stretch at Rowheath, I had very little left. A few other runners were now starting to close in, and the guy I’d been changing places with, sprinted past to finish ahead of me. It would be nice to say if he’d been female, that I’d find some extra speed from somewhere, but honestly think that was unlikely.

I was happy to receive my finishers medal……chocolate, of course, and be informed by Laura that I was first woman home.  I was also pleased with my (unofficial) time of 25:33, just 18 seconds off my P.B and despite the various stops for traffic and taking the wrong turn in Bournville Park.

Other notable performances of the day included Sam Gallagher’s son who finished 2nd overall in a very impressive 21 minutes and my friend’s six year old daughter in approx 32 minutes. Two to watch in the future.

Was a little concerned post-race that I may have taken the ‘race’ element a little seriously, being a fun run, but as Nicola Sykes informed me “there’s no such thing as over-competitive.” In the end I listened with a mixture of pride, amusement and mild embarrassment as the result was read out on club night, along with the slightly more ‘well known’ races that people ran that weekend, such as the London Marathon.

Originally I intended to save my finisher’s medal, (my current silverware being somewhat sparse), but once home, greed took over, and the medal is sadly no more.

If I don’t get lucky in the London marathon ballot for 2017, I’ll definitely be back next year either to run or marshal. All round, the Chocolate 5k was a fun and highly enjoyable way to spend a Saturday, as well as the bringing together of the local community in support of a very worthy cause.