Stacey Marston Reports: A while ago I was chatting to a friend in Wolverhampton and she told me about this race. It fell on an otherwise race-free weekend and sounded like a bit of a change from the usual road races I’ve been doing recently. I’d normally look for races with a UKA licence as I’m trying to improve my runbritain handicap but I thought it would be good to just enjoy the scenery for a change with the added bonus of a medal at the end.

Rachel Partridge soon signed up (both of our husbands being in the Isle of Man for TT races leaving us at a somewhat looser end than usual). Before long there was talk of a picnic and our numbers swelled with the promise of a June Saturday afternoon in the lovely surrounds of Cannock Chase.

I’d only managed one run all week leading up to the race; trying to shake off a mild summer cold, or at least prevent it from turning into something worse, so I wasn’t feeling well-prepared for the day. I felt considerably better though on Saturday morning and the weather looked tantalisingly bright from behind the bedroom curtains so any thoughts of a rain-check were pushed to one side and I packed up the picnic. My mum came with me so I was able to bring Jess, my dog, along too.

We parked up not far from the start area and collected numbers and some free caffeine and beetroot shots (I’ve saved them for another day though!) The weather was starting to look a bit worrying – it was overcast and when the wind picked up it was really quite cold. I could see it becoming more of a typical British picnic later with us all shivering around the sandwiches. 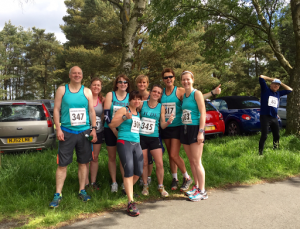 The race promised multi-terrain, undulating and hilly sections and it delivered. We set off along a gravelly track passing the occasional horse! I regretted not putting my trail shoes on (doing the usual thing of going with the majority rather than my gut instinct!) as there was a downhill section that was quite precarious. Nevertheless I took a few places here having started towards the back of the field. What goes down must come back up and the first of the climbs gave us a flavour of what was to come. I could see Steve ahead of me and for a little while we were all running along in single-file, through a wooded area, alongside a stream with the sun breaking through the trees. It was really enjoyable and I thought it would be nice to come back for a training run one day. Both Steve and I later commented that it was quite good to have the pace dictated and to save energy for the hilly sections, where I was able to take a few places as others walked.

On the longest climb I walked a little way, but I was pleased to keep going for much of the time. At one point I passed Steve and caught a glimpse of Jude ahead. Always hard to judge by pace in these races but I thought I must be running well to have Jude in my sights. It gave me a lift and I picked the pace up a little bit. As I passed two men after about 7k they cautioned me that there were more hills to come but I am trying to “run the mile I am in” and simply thanked them but pointed out my speedy team mate ahead!

I had only looked at my watch a couple of times but judged that it would be close to the hour which felt like a reasonable target on such a course. The course had opened out and without the cover of the trees it was very windy, but it was a mixed blessing keeping us from getting too warm. Steve came back past me with about a mile to go and I tried to hang on in there. The course was a little bit long and it was a relief to see the finish line in sight, with good support considering the size of the race! I checked my watch to see I’d finished just under the hour as I’d hoped. We all finished in a similar time and picked up lovely square medals and a goody bag containing a bottle of water, cereal bar, a chocolate bar and a sample of sports rub too, which would come in handy later when my calves started complaining about the hills I’d subjected them to. Kathryn had enjoyed her “comeback” after some time out from racing – celebrating by getting attacked by a wild animal (actually a nasty scratch from a big stick but the bear story sounded better).

Although it wasn’t classic picnic weather we took over a picnic table and had rather over-catered, with sandwiches, quiches, samosas, loads of crisps and even a box of posh chocs from Steve. The occasional gust of wind and flying biscuit tin lid doing nothing to dampen our spirits. A great day out! 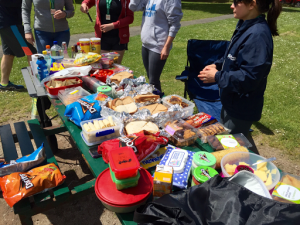