Seven go off to race in the Centurion Grand Prix 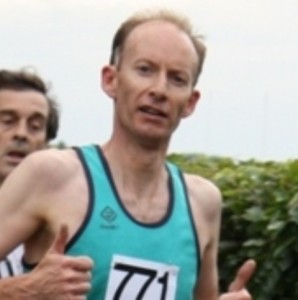 Andy Wheeler reports:  Having missed most of the first half of the year through injury I am definitely playing catch- up when it comes to Grand Prix races, so I needed to complete virtually every race when I came back in late September for the road relays.

There seemed a relatively small field for this Centurion 5m race and only a handful of us from the club competing, most people having run in the Warwickshire cross-country the day before.  So this being the first race of the year after the excesses of biscuits and chocolate of Christmas I was definitely going to have to work hard to ensure a good time, to beat my pb from 3 years ago. It was ideal running conditions, sunny and cool with no wind and only slightly muddy under foot, a far cry from last year with ice everywhere making it hard going underfoot.  The course is three laps (1 small and two large) of Babb’s Mill Lake and the river Cole and all flat: no hills. From the off I followed close behind two runners into the second lap but then managed to pass them both and hold them clear up to the finish line. Having the two of them following close behind kept the pressure on me all the way to the finish line. I managed to beat my last pb by 20 seconds and in 14th place and 2nd MV 45. Paul Dugmore was the second BVH runner home not too far behind, followed up by Kathryn Doudican as the first BVH lady home in 40:10. Lesley Pymm ran a new PB which was also a new club age record for 5 miles., Nicola Morris and Philomena came home in a bunch a short while later with Mick James close behind. All in all it was a good race with respectable times for each of us.