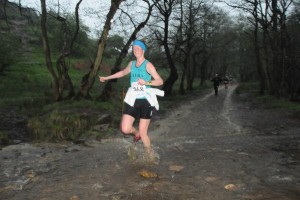 Laura Gale Reports: This race is part of the Mercia Fell Runners ‘Shropshire Summer Series’ of races. There are 7 in total, and it’s your best 4 results that count. This was race no.2 – so there is still time if you want to compete!

Race HQ for the Caradoc Classic was in Church Stretton Social Club. Entries are on-the-day only and it was just £5 (no safety pins), so there were plenty of runners milling about for me to size up. This is the kind of race where I start to feel a little out of my depth. There were clearly seasoned fell runners everywhere. The kind that wear club vests that were made before man-made fibres were invented. The kind that have lovely weather-worn faces, but instead of laughter-lines they have grimace-lines. The kind that probably live out on the hills, and not in a flat city near canal tow paths….

I’m sure you will be able to guess who else from Bournville was there….? Of course it was Lesley Pymm! Accompanied by the ever-present and increasingly spritely Mike (who has now done 2 parkruns, might I add)

It was pretty torrential outside, and the word went round that you needed to run with a wind/waterproof jacket. It is important to mention that if you are thinking of doing any fell running races make sure you check out the kit list on the FRA website and have it in your car incase organisers decide last minute that you need to carry a whistle or emergency food…

It was around a 10 minute walk to the start along a footpath, over a railway line and across the A49. Around 100 runners were at the start. A good turn out from Tipton, including quite a few of their junior runners. There was a shorter race for the over 10s and over 12s, but anyone over 14 could run in the main race. The race started promptly at 7.30pm and we were off along a wide footpath and quickly out onto the muddy edges of fields. The heavens properly opened at this point and we were all pretty much soaked to the skin. The ‘main event’ started after this field section – it was laughably steep and EVERYONE walks.

Fell races are graded according to steepness and distance. The Caradoc is graded ‘AS’ – A is the steepest/hardest category that averages no less than 250ft for every mile of climb and no more than 20% of total distance on road. The ‘S’ stands for Short (thank goodness) – a race under 6 miles in length. Check the FRA website for other abbreviations, eg ‘NS’ means you need navigation skills!

The Shropshire Hills are a beautiful place to run, although the heavy white mist was somewhat obscuring the view this evening. The course was marked out with short bamboo poles with florescent tape attached. They were pretty hard to see when the race thinned out and marshals voices in the mist were a little misleading – although all this just added to the drama! After the lung-busting climb we then ran along the top of Caer Caradoc Hill, but still going upwards… until we reached a peak at around 2.5km. Then the descent started. It was actually steeper than the uphill section and on the short rabbit-nibbled wet grass it was somewhat slippy. This is where a lot of the seasoned fellows charged past in gravity defying fashion, but the short length of the race made me really push myself too. There are sheep tracks that you could follow that roughly zigzagged down the hill, or you could forge your own direct route and make your personal racing line. It was quite a sight seeing hoards of runners hurling themselves like lemmings down the side of this hill. After we were down off the steepest slope and onto a wide rocky and muddy track I really pressed on and overtook some of the gravity defiers and finished feeling fast and strong.

This was a friendly, well-organised mid-week race in a beautiful part of the country.

Lesley was 1st in her age category and finished in 48.40

A ‘good day at work’ for the Harriers!

Link to the race series: http://www.merciafellrunners.org.uk/node/2741