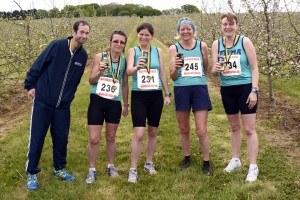 Lesley Pymm reports:  This was the first time I had done this event as it always clashes with a cycling weekend that I have been involved in.  This year, I decided to miss the bike and run on both days!  I was really pleased that I did as it is a lovely run.

This race is 6.5 miles and all takes place in the fields of Bulmers orchards.  I was not able to hear much of the briefing, but did hear them say that there were rabbit holes to beware of in the last hill.  How would I know which was the last hill!?

I had looked at the map, but it was one of those really complicated routes where we all went round in circles and sometimes came back along a path that we had gone round earlier in the other direction.  Bottom line was, I had no idea where I was in the race and how much further there was to go!  It was amazing to look over hedges and see runners either in front or behind going round in that field.

There were warnings at one point to keep to the right to avoid disturbing the bees in the line of hives.  We went up and down.  It was very dry, so trail shoes were fine although studs may have been better if there had been rain.  We just ran round these orchards with trees in blossom and eventually we started to go uphill and there were rabbit holes with bits of tape stuffed in to warn us!  This must be rabbit hole hill, therefore it must be the final hill.  It was then a bit of a charge to the finish, not really knowing how far it was to go.  Lots of shouting from the rest of the BvH contingent, Mike and other people I know and then it was over and I was being handed a medal and can of cider.

Jack Roberts was 11th overall in 45.22 (of course, being a youngster, he had not been involved in the Masters event the day before).