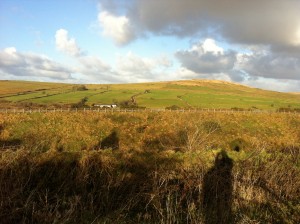 What would most ‘normal’ people be doing on a New Year’s Day? Curled up indoors with a hangover quite possibly! Not so for a bunch of hardy (mad) Cornish men and women who headed out for the annual fell-style race across Bodmin Moor. Mum, whose fault it is I started this running lark, suggested the race, and being the first day with blue sky in well over a week, it was an opportunity to stretch the legs not to be missed! Plus the finish is at a pub (always a bonus).

This race is quite special as it’s a fun charity run, so no numbers and no timings, just a sheet to sign yourself out and back, a donation to the mountain rescue teams, plus a man with a megaphone to start everyone off. Despite this, marshals and mountain rescue were out in force braving the wind and cold (5C according to the car) to point us in the right direction. We started at the hangover friendly 11am with a dash down a steep lane from the Jamaica Inn pub and under the A30 before the climbing started. Shortly after this we hit the mud and puddles with a rough track that took us to the start of the moors proper. There was no being dainty about it: once you’ve leapt into the first puddle you don’t feel the cold! Running up and over the moors was hard work on ankle twisting and shoe-swallowing knee-deep peaty mud, but the views were stunning: blue skies and rugged tors. These blue skies were only interrupted once by a short, but sharp, hail shower before we started the near vertical scramble up to Cornwall’s highest point: Brown Willy tor (420m). Once at the top it was hard work battling gale force winds that tried to push us over as we started the equally vertiginous path back down. Then it was a relatively flat, but very boggy, sweep across more tussock back to join the path to the pub. The return journey was doubly muddy as the path had been well churned up by all the runners, which made for hilarious slipping and squelching up to our knees again! The final push was back up the steep road we had started down, which felt like hard work after all the twisting and slipping on the moors. I finished the 7.25 mile route in 1:18:08, which seemed reasonable as the terrain was challenging to say the least, and for the first time ever I managed to beat my running mad mother (by a whole 7 minutes!), which was great! 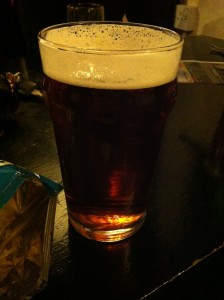 Ridiculously organised mother had packed a gallon drum of water, a bucket and scrubbing brushes in the back of the car so we could attempt to scrape some of the thick mud off our legs afterwards. In doing this I discovered the disaster of the mega blister on my heel (pretty much all the skin gone): never fear, the lovely mountain rescue men were able to bandage me up! After all the excitement it was time to retire to the Jamaica Inn for some post-race rehydration at the pub in the form of a pint of local ‘Jail Ale’ and a packet of crisps. Delicious.

If any BvH runner finds themselves in the deepest darkest southwest next New Year I can highly recommend this race! The friendly atmosphere is great and the mud is fantastic fun, not to mention the beautiful views on route and good beer at the end! Truro running club organise the event, so check out their website (and spot mum’s hilarious blog entry for the race on there soon): http://trurorunningclub.org.uk/