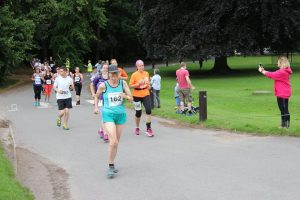 Lesley Pymm reports:  This was a new one for me – it is only the second time it has taken place and it was a lovely run.  The start/finish is at Foremarke Hall which is a prep school for those going on to Repton (how the other half lives!), a glorious setting.

The run started within the school grounds and then we did a short loop through woods to come back past the start area again before going off to do the run proper.  Out past a very fine looking farm and then on to very narrow paths over fields.  I got stuck behind a man who was very slow on these paths and it was impossible to pass him.  What was frustrating was that he speeded up when the path widened, so by the time we got to the next narrow bit he was in front again.

I just relaxed and accepted that it was what it was and the scenery was lovely.  At about three miles we went through Ticknell village and then out towards Staunton Harold Reservoir.  At the start someone had told me that there was cake at the top of the hill.  At the feed station at about 5 miles, which was at the top of a slope, there was cake.  I wasn’t sure if this was the hill or not, but it was certainly too early in a race for me to be eating cake. 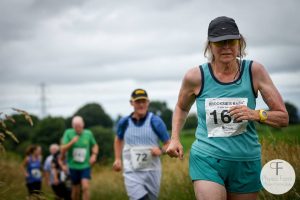 The next 5 miles was lovely.  There were a load of stiles, but they were not too high so not a great problem.  We went through Robin Wood and then Heath Wood.  Then we were running up the drive to the school. but there was the small matter of a few hundred meters through the little wood we had gone through at the start.  Then I was finishing.

It was a good run.  The ‘goody bag’ was a proper reusable cloth bag supporting South Derbyshire Mind.  There was a mug, pen and a booklet about where to seek help with mental health issues if needed.  Fresh fruit was also available.  I went off and got a shower – which was in a converted stable – before supporting the prize winners as they got their prizes.