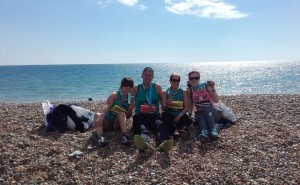 Simon Newman reports on the ‘Brighton Rockers on Tour’: Sharon and I set off to pick up Stacey Marston and Rachel Partridge to start our Teal trip to Brighton on 16th April 2016.

We decided to head straight to the Expo to collect our numbers which is right on the seafront in the centre of Brighton. The traffic was a nightmare once we hit the town centre. We spotted a long queue of people and we all kinda hoped they were queuing for the Odeon cinema which was next door – we were wrong! Sharon jumped out the car to get in the queue while I parked up which proved to be a good idea as the queue went on for probably as long as the marathon itself!

Once we had got our number we headed to Worthing to the hotel we were all staying in. Stacey had booked us in an Italian restaurant for 7pm which we had about 10 minutes to get ready and find. It all worked out fine and the food was lovely.

We decided to drive and dump the car as close as possible to the start line as we could which was about a 20 minute walk downhill.

We got the park about an hour early which is plenty of time you’d think, nope! The toilet queues were huge; I’ve never seen queues as big as these before at any race. We also noticed the timing chip mats and had a laugh knowing each time we crossed a 5k mat it would beep and Jude would be hitting the refresh key on the laptop J so we said when it starts to get tough just remember we are being tracked ! (It works)

After a quick visit to the naturist toilets we were all set to go, I had lost the girls at this point so I headed down to my red start zone when I managed to see Stacey standing in the blue zone, Sharon and Rachel were in the yellow. I knew I would get to see Sharon and the Rachel on route anyway so I headed further down as my line started moving.

After trampling on the muddy field and having a couple of pounds of mud on my trainers we were off-just after high fiving Zoe Ball! I set off into my pace about 7:10 minute miles, the route went through the town then uphill for about half a mile then come out at the seafront at about mile 5, we turned left running along the promenade and then a spectator who was stark naked decided to jump in and start running about 20 meters in front of me, not a pretty sight for me but the crowds seemed to enjoy a naked man running towards them! He only lasted for about 200 metres, no stamina! J We then went up a long steady hill, knowing we had to come back this was I thought this will be a nice downhill section so nothing to worry about.

Just after this point there must have been about 50 Mods on scooters blasting up the road followed by about 50 Austin Mini’s all tooting their little horns at the runners, everyone was cheering them, waving the union jack flags.

We turned around at the end and this is when I got to see Stacey first then Rachel then Sharon, we all shouted to each other, a little bit too far away to high five but by the smiles we all had it gave us that much needed boost between miles 7 and 10.

I was feeling great at this point and crossed the half marathon mark at about 93 minutes, I carried on and at about mile 15 we went into an residential area which wasn’t the best for sight seeing but it made the miles up, we carry on up the coastline towards an even prettier sight – the Brighton Power Station! Woo hoo this was the turning round point knowing we only had about 5 miles left.

The crowds were fantastic, a smaller version of the Manchester marathon popped into my head, there were lots of name shouting as I had it wrote on my top, it was brilliant to see all the power up signs the kids had drawn for us to punch for that much needed power boost!

I started to struggle around 21 miles and had to stop with cramp, my leg completely locked up a couple of times but once I got going again I was determined to finish, mainly knowing that Jude would be tracking us J The last few miles were running along the promenade which was packed with supporters cheering us on, also at this point you start seeing more and more people struggling with cramp, fatigue or generally just wondering why the hell they ever signed up for a marathon.

Running through the finish line was brilliant as the Brighton marathon did a tribute to David Bowie by playing “We can be heroes” and also put the song name on the back of the t-shirt along with David Bowie 1947-2016.

The spectators were brilliant, atmosphere was excellent and the pint of ale and fish and chips at the end were the best I’ve had in ages!

The goodie bag was a T-shirt, followed by colleting protein bars, flap jacks, crisps and water not really a huge amount for the high entry fee of £60 but it was a late entry. (Which is why I was a bit put off by the bloke trying to rush me with my t-shirt, he said take an X-large I told him I’ve just ran 26 miles and I want a top that fits…..I had a large J

Would I do this one to do again? I wouldn’t personally but I would recommend it to anyone wanting to make a weekend trip to Brighton but definitely stay the extra night as driving back for 3 and a bit hour’s isn’t the best practice after doing a marathon.

The amount of support I have had over the last couple of months has been brilliant; I would never have gone for the time I got without having other people believe I could do it. Thanks!

We all completed the 2016 Brighton Marathon in fantastic times.