Lesley Pymm reports:  The first of the Winter Fell Race Series and the first time I had run this event.  It was at the same location as one of the Summer Series, but was a bit longer!  This event is billed as 11k and 690m climb.  It started near Criggion Village Hall and the first mile or so was all uphill on a rocky path. Then we went into Breidden Forest and cut across to run up Middletown Hill.

I was running behind a group of three runners.  One woman was running her first ever event and there was a nine year old girl running with her, who was too young to enter the race so was just running for fun; I think the third person was her father.  I did pass them, but on her own I think the nine year old would have beaten me. 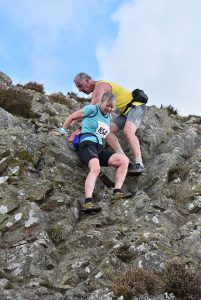 The uphills were hard, but nothing to the downhills!  As I scrambled down this one, I was pleased that it was so dry – however, a bit later on we were running through the forest and it was very steep and dry.  There was nothing to dig my studs into and I was sliding over, so just gave in and slid down on my backside.

I was pleased to see Rodney’s Pillar ahead of me, eventually.  I knew it was a steep climb up there, but then it was only a mile or so to the finish.

Mike was on the top of Breidden by the Pillar – camera at the ready and telling me I had to touch the trig and then take the path down.  Then he started to run down with me!  I did get away and charged down the path I had climbed up at the start, and had managed to get changed by the time he got down. 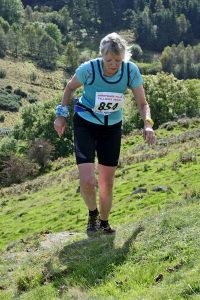 There were refreshments and presentations in the Village Hall.  A great start to the series.

The distance was about 7.2 miles and I took just over two hours.  It was great fun if not my quickest time.