Lesley Pymm reports:  What a fantistic turn out from Bournville for the Master’s Relays on Saturday.  7 complete teams finished for us, that has to be a record but I am sure we can improve on it for next time!

The women started off at 10.30 with 3 teams entered in the W35 category running four stages and one W45 team doing three stages.  It got warmer at about that time so I found the breeze oddly welcoming!

It was a similar loop to other relays at 3 miles.  We started at the usual place near Town Gate and went off downhill.  Then we had the biggest climb of the day.  No loops off, just straight up the hill.  At the top we turned right to go the Jamboree Stone, then went past it and a little way out towards Streetly Gate before turning roung and coming back to the Jamboree Stone.  For the women’s race, Taz was a very welcome sight there, complete with BvH flag.

We then forked left, down towards Keepers Pool and then the uphill through the woods to turn right to the finish and push on uphill to shouts from the rest of the team and supporters.  I was at a race on Sunday and a man there commented on the level of support that we had at the finish.  Special mention has to go to Josh Hopkins who was a really good spotter and let everyone know when our runners were approaching so that everyone could get shouting! 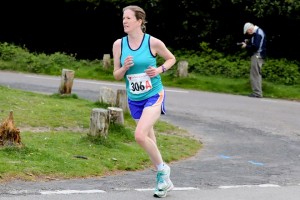 Linda Howell was (just) our fastest leg of the day doing it in 19.12, with the ever improving Laura Gale doing 19.14!  Suz and Sarah made up our ‘A’ Team with very respectable times of 21.50 and 20.25 respectively.  They came 11th overall out of 35 to complete.  As ever, there were a number of incomplete teams.