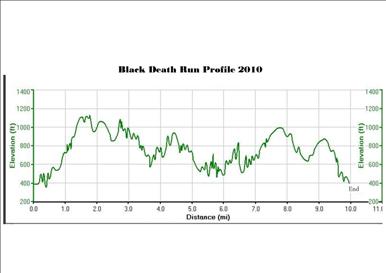 The Black Death Run is so called because the route takes us through a hamlet that was wiped out by, you’ve guessed it, the Black Death. Organised by Taunton HHH, it has all the elements of a great hash, but no opportunity for short-cutting – and they have increased the distance this year to 10 miles. I have attached the profile which shows that if you are not going up, then you must be going down – there is hardly any flat, and the downs are frequently far more difficult than the ups! It is a great run, with a 3 miler for children and those who are not up to the 10.

There was a steel band at the start and they played for about 1.5 hours – because of the intricacies of the course they could be heard all the time, and this was a real morale booster. When they had finished a rock band took over – although they toned it down a bit. The lead singer did comment when asked to sing something particularly outrageous that her children were there! This all took place at Coombe Sydenham Country Park in Somerset and it is the second time I have done it.

Great event, spectacular scenery from the tops of the hill and the primroses that covered the top of the last hill from mile 8 to mile 9 made it (almost) worth the climb! The finish is all downhill for the last mile, so you can actually look good as you finish – however much it hurts. Cotleigh Brewery is one of the sponsors and there is a beer tent as well as food at the end, so the party continues for a while with entertainment for the children.