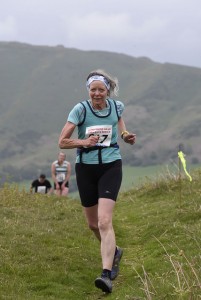 Lesley Pymm reports: After the dreadful weather for the last event in the Shropshire Hills Fell Race Series, I was keeping an eye on the forecasts for yesterday.  It said there was to be rain at about 8.00 and mist at 10.00.  Well, I’d be back by 10, so it was not going to be as murky as last time thank goodness.  The details on facebook indicated that minimum kit was jacket and whistle.  I drove over in good time and it felt pretty cool as we hung around by registration, so I decided that a T-shirt was necessary.  I warmed up and saw tape going vertically on a hillside and asked other runners if that was an up or down.  They assured me it was down, just before the finish – that was something to look forward to!

Eventually we were off and running up a short section of tarmac road to the open gate by a cattle grid.  Over that and the path became stoney, then we turned off and were going up a grassy path onto the Batch. It kept on going up until eventually we were directed downhill.  A man I had passed uphill came charging past me on the downhill – it was amazing to watch!  Up again and I was gaining on him.  I passed him and then on the next downhill he came past me again – as did the first of the junior runners who had started after us.

It was a lovely course and you could see the hills of the Long Mynd, Caer Caradoc, the Lawley etc all around us.  Ahead there was a string of brightly clad runners bobbing up and down the hills.  What a lovely way to spend an evening.

We had been warned about some of the downhills and I did take them easy, especially on the narrow sheep tracks next to steep drops.  There was one downhill and the man who I had been passing on the uphills came charging past again – he was flying and I could see him getting away.  Over a little stream and then there was a very steep climb and suddenly he was in front of me again.  As I passed him near the top I said: ‘Well, it’s a downhill finish so I expect you’ll come past again’. 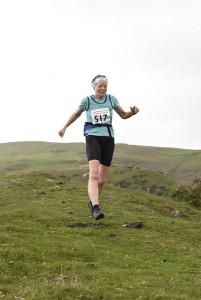 Over the top and the running was not too steep down so I was going well.  It was a good, runnable section and I was enjoying it.  Then I was directed to the taped off bit I had seen earlier and I headed down it.  Approaching the bottom, I could hear the man behind me – but he hadn’t caught up.  I negotiated a stoney bit, where one man had already had an accident, and was onto the final run-in.  I just kept going and I beat this man!  We shook hands and he said that he had noticed me the last time he did a fell run as I was so much stronger on the uphills than him.

One of the younger runners from Tipton went over just before the finish and she hobbled over the line to a lot of clapping.

The presentations were in the Yew Tree pub and it was a lovely evening as the chips were consumed.