Dave Harte reports: This was my second fell race (after Steel Fell in the Lakes last year) and was to again prove that whilst I can run uphill, I still have a lot to learn about running downhill.

The village of Bamford is in Hope Valley in the Peak District. Like many other events around this part of the world there’s a fell race thrown in to liven up the fete/show/sheepdog trials (in this case) or whatever village shindig is taking place.

The race takes you to the top of Win Hill which is 462m, making the race roughly a 300m climb. There was no special equipment needed for this so it was simply a case of turning up to run.

My pre-race nerves were largely due to having forgotten to pack my trail shoes but the race involves a couple of miles on an old rail track and the ground was sufficiently dry throughout that wearing flats made little difference.

The field of 160 set off at 1pm leaving the sheepdogs busy with the sheep. The climb doesn’t kick in until 1.5 miles and it is then single file at more or less walking pace for almost half a mile.

After that there’s a little chance to take a few runners out as you make your way to the summit’s trig point.

But like my first race any ground gained on the climb is immediately lost on the downhill as I still have little idea of how to effectively let myself go and run/slide/roll/hurtle down a fell.

I probably lost about 7 or 8 places from the summit downwards before finding myself back on the flat ground of the rail track and a sprint to the finish.

A really enjoyable race, I managed to come 61st overall (circa 160 runners). It was certainly valuable hill practice ahead of my next race, the Trail Wales half marathon in late June. 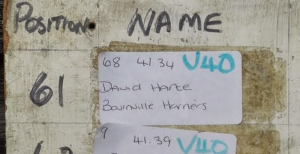