I’d heard so much about the Ashby 20; the legendary hoodie, a cheese cob afterwards and a gorilla (actually a man in a gorilla suit, but still) – other Harriers talked of this epic race as a must-do. A 20-mile race is a rite of passage for those with a Spring marathon in the offing, or for those who are more circumspect, waiting to see how they fare before signing up for the full 26.2. There aren’t too many in the calendar and Ashby falls perfectly for anyone with a place at London or in my case Manchester. It seemed to book up quickly, but 21 Bournvillains managed to get a place, no doubt getting in early as a result of previous experience or Jude’s PR campaign.

There was the usual convoy from Rowheath on Sunday morning, but I was kindly offered a lift by Collette and Mike setting off closer to home at the same time. I’d seen signs warning of delays owing to the events over in Bosworth as they were moving the remains of Richard III to Leicester Cathedral on Sunday, but we had a clear run, arriving in Ashby-de-la-Zouch in plenty of time on a perfect day for running; cool and clear.

As a club-run event with the backing of a major brand (Aldi) the race benefits from knowledge of what works for runners, a friendly feel akin to smaller races but a field size and organisation that compares well with large “city” races. The roads were mostly closed at least on the left-hand side and the water-stations were manned by a cheery bunch – with offers of gels, bananas and chocolate as well as both cups and bottles of water. With the benefit of chip timing too the slightly congested start area wasn’t much of a worry and I found myself lined up at the start with a group of similar-paced club-mates. I thought I’d start out with the fellow BvHers who were all looking to get under the three hour mark (or at least intending to set off at that pace and see what happened). I told myself I’d hang back if things started to feel tough – it’s all about making the Manchester start-line at the moment.

After the first mile or two my knee was feeling okay and I was enjoying the course, running with Steve Doswell, Clare Mullin and Rachel Partridge (joining us for the first half of the race). There’s some support in places, but also a great sense of camaraderie with other runners. As well as chatting to Harriers I struck up a conversation with a lady from Southwell Running Club, one of the clubs I’ve been checking out as a potential second claim with my new job taking me up to the Newark/Mansfield area for a couple of days each week. The course is definitely best described as undulating, but the hills are spread out a bit and I don’t think there are any that are real killers (a surprising result of training with Bournville is that my definition of a hill has changed considerably in the last two years!)

Unfortunately I had a few issues in the second half of the race, involving a trip to the portable loos, a few miles adopting the “walk-run” strategy and the use of the facilities in a pub.  I toyed with dropping out at a water-station but somehow the thought of the hoodie pushed me on – no finish, no hoodie! I am starting to wonder, after my fall at Anglesey and now this, if it is possible for me to take part in a race without embarrassing incident… Good job most runners understand these things! The major down-side to this, as well as slowing me down, was running by myself having been enjoying the company to help pass the miles in the first half.

The sound of the crowds and the PA system announcing runners crossing the line got me through the last few minutes, along with the promise that it was downhill all the way. It was great to see Rachel again at the beginning of the finishing straight with a few hundred metres left to run. Taz was also waiting with his camera and I tried to summon the energy to smile. I crossed the line and registered the gun time was just over 3 hours 10, so I expected I’d come in just under that arbitrary boundary… The text message that followed confirmed it at 3:09:48.

I gratefully received my hoodie and inhaled the cheese cob followed by a cup of tea courtesy of Rachel, some amazing cake made by Taz and a lovely hour or so with the other BvHers who had finished. We compared notes; from amazing feats, and a prize for Linda, PBs and great first-time runs for others and decisions to sign up for a marathon from four previously “undecided”. I felt like a different person to the one who had started the race; blistered feet, the beginnings of a cold and a sick, empty feeling that no amount of food has put right since but also feeling proud and happy – to be part of a great team, to have completed my longest ever run and just to enjoy sitting in the sun on a Sunday afternoon with friends. 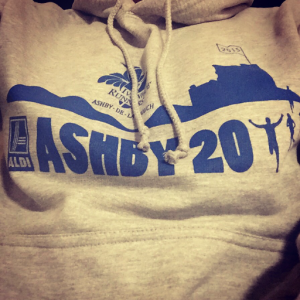 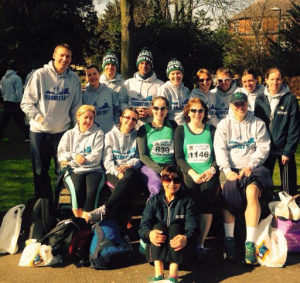