Knowing that I would be heading back up north to the family for the festive period, I thought that the best way to break up the inevitable cycle of turkey leftovers and charades would be to look at what races were on locally. After discounting a Boxing Day race on the grounds that I’d almost certainly be suffering from the night before, I settled on this very popular 10k event. So on Sunday, and with my Dad tagging along for a morning out, we headed off into the badlands of East Lancashire.

The race itself takes place just outside Clitheroe and incorporates the Northern Championships which, together with the PB potential, means it attracts a ridiculously high quality field.

Having counted the number of runners (over 1200 according to the announcer), and worked out how much Christmas Pudding I’d eaten over previous days, I decided to take up position about halfway down the field. With hindsight, this was probably a mistake as I spent most of the first two kilometres overtaking people. From the start there was a short downhill section to cross the River Ribble and then a climb back up before the course settled into an undulating route.

I could see why so many people took part as this was a very good course – entirely on closed rural roads and with gradual climbs and downhill sections so you could keep a good pace.  I passed the halfway point feeling quite good, however my pace dropped over the next couple of kilometres with a few more uphill sections than I was expecting. Luckily, having past the 8km marker, the lie of the land meant that I could see the 9km sign in the distance with gave me a second wind.

After that, it was another downhill section back to the river before a short climb and a 400m flat run to the finish. I was beaten in a sprint finish by a man from Bingley Harriers but still managed an unexpected but very pleasing PB so overall a great way to end the racing year.

This was a great race, really well organised and supported as expected and a great way to shake off Christmas over indulgence. I’ll be putting it in the diary for next year. 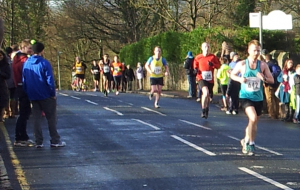