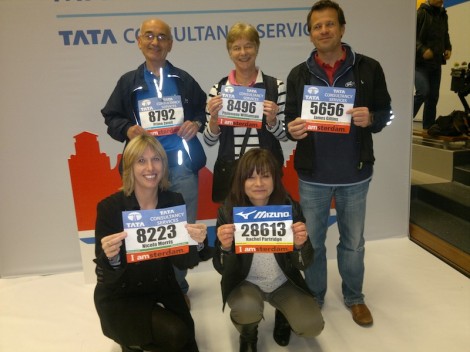 Report from James Gittins: Whilst most of the Bournville Harriers were pounding the streets of Birmingham, there were 8 of us who were running in Amsterdam in the City’s Marathon and Half Marathon.

It was a shame that the dates clashed, but when a few of us started talking about it early in the year, it seemed like a great idea. A great idea indeed, we all had a fabulous time.

We arrived on Saturday afternoon and registered at the Expo, which was situated near the race start point at the Olympic stadium (Answer to the trivial question when was the Olympic Games in Amsterdam is 1928!)

Unfortunately as we had booked the race at different times throughout the year we ended up staying at three different locations between us. Cicci, Simon, Pauline and myself stayed on the famous Botel, yes a boat, which is a hotel! This was a short ferry journey from the central station, and full of runners including some from Coventry RC. Our group went out into town and had an excellent pizza and pasta, thanks to Cicci for negotiating a table with his fellow Italians.

Race day arrived having not had the best of sleeps, due to noise and music taking place in the room next door. So the 6am alarm was not welcome. However having fuelled up on dutch cuisine, we were all set to get on our way to meet the others at the start.

A shuttle bus, a ferry and two trains across town to the Olympic stadium was what we had to do to get to the start, however it was straightforward and the transport system, once you get to know what you are doing, is really good and easy to use and fun. The trams were not working on the day as the race route is on the tram routes. So this made the trains that extra busy, but probably no different to London Marathon day.

We met up with the others with good time to spare and our chief supporters were also ready to be on route, Colin and Marie Williamson, Sharon Newman and John (Pauline’s hubby). Having got rid of spare clothing we were being ushered into the Olympic Stadium where you start on the athletics track and head out of the stadium, with a stadium finish as well. The awesome moment was the Gladiator theme being played as we were walking into the stadium, made the hairs stand up on the neck, we were ready for the off.

Suggested 15,000 runners started the marathon, and we slowly got across the start line after approximately 10 minutes waiting. We were off, heading out of the stadium and into the packed streets of Amsterdam. The support was terrific and noisy along with the bands and DJ’s helping us out. I’m sure BVH was mentioned across the speakers at one point.

The first 5Km was my slowest, not sure why, probably due to the congestion and the amount of people, there was also a slight bottleneck as well. But on the way we were. Simon and I ran together from the start and had a plan in place. Simon was to get under 4hrs and mine to be a similar one, my excuse for not going for that PB, being that I had been suffering from a cough and cold for most of the week before, plus I had a few weeks with a painful foot!

The route was flat as we had expected and scenic, weaving in and out of the streets of the Amsterdam suburbs. There was a very pleasant section of the course as we ran down the Amstel River, with a loop and then back up the other side. Of course this means you see the leaders heading up the opposite side of the river, way out in front, which is always fun to see.

The route meanders back up the river and into town, crossing the half waypoint. At half way I was feeling good, still running with Simon who clearly had too much energy as he was high fiving everyone and singing along to the crowds! We were both on track for under 4 hours at this point.

The last 10k were fast approaching and the gels had now been taken, the drink stops included a cut banana, which was good, as well as the energy and water drinks. The organisation was very good and there was never any hassle with the officials.

At twenty two miles, I said to Simon ‘only two two’s’ to go which seemed to work better mentally as I believe it is better than saying 4 miles to go. I always tend to break the race down into sections in my head, I never think about the 26 miles, I tend to think, first ten, then up to 15, then 17, then 20, 22 and then two twos, which really works well for me. Plus if you relate it to Monday and Thurs night runs you can picture the distance and this sometimes makes it easier.

With ‘two two’s’ to go, Simon did head off, and congratulations to him for achieving his PB of under 4 hours, with a great time of 3hrs 55mins which is approximately 10 mins off his previous best. A fabulous run, although we suggested that a faster time was possible if it wasn’t for all those high fives!

I came into the Olympic stadium and really soaked up the atmosphere, and ran for the line with arms aloft. Delighted to finish, I had achieved my goal of under 4 hours with my time being 3 hrs 58 mins. My thanks must go to my friends at Bournville Harriers whom I have trained and run with over the last few months and years for that matter, to help me achieve this. Looking at my 5km time splits, they were very consistent, apart from the first 5km, which was 30 mins, the rest were between 27 and 28mins.

We then watched Nicola, Philomena and Cicci all come in with tremendous times as well, many congratulations to them for their efforts and being such good company for the weekend.

The half marathon started at 1.30pm with Rachel and Pauline taking part, whom we saw finish again inside the Olympic Stadium. Well done to both of them as well.

So time to celebrate, we all went out that evening and had a lovely meal, which included Argentinean beef and other delightful cuisine, washed down with some of the local ales. There was lots of discussion about our races and how it went, along with loads of laughter as well, as you can imagine Then of course one has to go for a stroll around the town, including a walk by the famous red light district, which was an eye opener for us all!

Anyone thinking of taking part in an international marathon should do so, as it is so much fun, especially with fellow BVH friends and family. Where next? Maybe we should plan an official BVH tour? 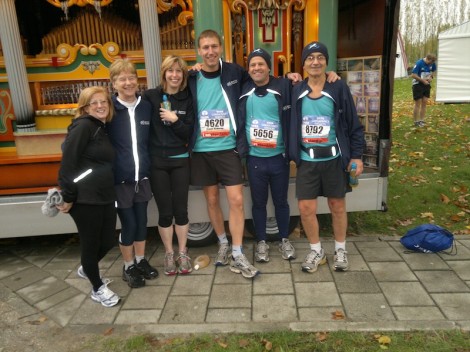 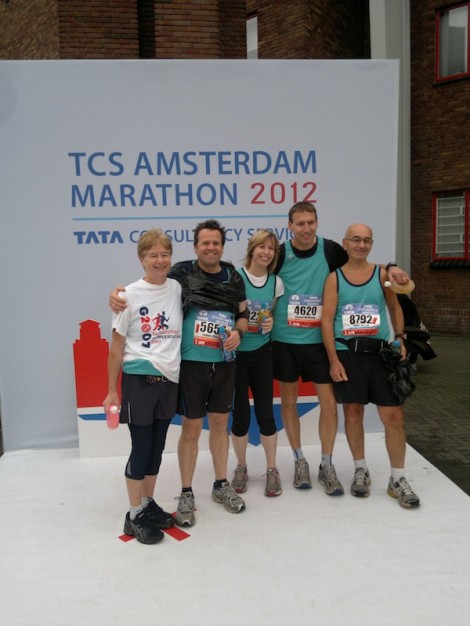