I had been on the look-out for a scenic 10k ever since I had to pull out of the Brighton 10k last November and the Richmond Riverside Run didn’t disappoint.  The race is out and back from Ham Street to Kingston along the towpath.

There was a great atmosphere at the registration area when we arrived and with a few vans selling food and coffee.  It’s a small race so it didn’t take me and my friend too long to collect our numbers and pop to the loo.  It was a beautifully sunny morning so we had a little wander around and admired the houses and boats along the river.  With it being such a small race, it was easy to get ready and leave our bags in their designated number area mere minutes before the start.

At 9.30am we all lined up with the faster runners repeatedly advised to get to the front due to the narrow path we would be running on.  They set us off in waves with about 30 seconds in between.

My plan was to set off quicker than normal, try and pass people early and then settle down after a kilometre or two.  The path itself was muddy with lots of potholes, a bit like the canal route in Birmingham but with bigger stones and more mud.  Trying to dodge in and out, avoiding other runners and the low hanging branches made it a bit more like cross country than I had anticipated!

At the 3k mark we came out of the trees and got a great view of the river.  We were directed up a little hill to the higher towpath and could see the lower one we would be running back on.  The views of the boats, the rowers and the beautiful houses were fantastic, but with such narrow paths, I had to keep focused on the run.

The turning point to come back along the lower towpath was 4k which was a bit weird psychologically.  It was good to be heading back but we still had more than 5k to go.  Being lower down and now that the runners had thinned out a bit, I got a chance to really take in the stunning scenery and enjoy the bright sunshine.

At about 6k I started to feel tired and gave up on dodging the puddles and mud. At 7k we were almost at the start/finish line again but we had to run past it for another 1 1/2k or so.  Before the race I thought this might break me but having some supporters cheering us again was lovely and gave me a boost for the last 3k.  I kept waiting and waiting for the turning point but it was nowhere in sight and I was starting to feel like I wouldn’t get a PB.  At 9k we turned back and my brain tried to calculate how long I had to do the last 1k.  Needless to say I had no idea what I needed to do so I just tried to pick up the pace as much as I could.  I could hear the crowds again and I could see the finish line which was just what I needed to keep me going.  I got to the finish and managed to knock almost 2 minutes off my PB, owed entirely to my XC training!  I was so delighted!  A guy came up to me straight after the finish and thanked me for being his inspiration as he’d been running right behind me the whole way.  Normally I feel like punching people when they say that as they usually sprint past me at the end.  But as I was in such a good mood and he had the good grace not to pass me, I merely thanked him for his kind words.

My friend finished a little while later and she too was delighted with her performance.  It was her first ever 10k and she loved it.  We collected our medals and our free bottle of lemonade and walked back to the bus stop in the glorious sunshine.

I would thoroughly recommend this race for the scenery and the generally chilled out atmosphere.  There are a series of races along this route so you won’t have to wait until next March if you’d like to do it. 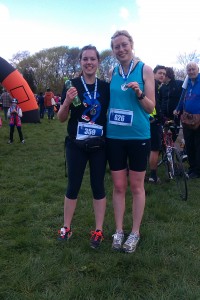