Anyone who knows me, knows about my endless search for flat races.  Forget your ‘interesting’ courses and spectacular views, flat and uneventful races are my bag.  I was delighted to find a half marathon scheduled for the Spring/Summer, which I have never done before, and was located near family so I could get there easily.  There was a 9am start, so not too much of a rush to get up, eat and make our way to the Park and Ride just outside of Chester.  The organisers had put on extra buses for the day so we barely had to wait five minutes for one.  It was really nice being on the bus with lots of other runners and supporters and definitely put me in a good mood for the race.  In less than ten minutes we were at the Chester Race Course for the start.  There were lots of posh toilets and changing rooms available, normally reserved for the horse racing folk, which helped calm my nerves a bit.  The ubiquitous Heart FM bus was there blasting out tunes and positive affirmations, so after a bit of warm up bogling to ‘Return of the Mack’, we wandered around the race course to check out the stalls.  The organisers were handing out free bottles of water and bananas to competitors and also offering free physio advice.  There were lots of vans selling coffee and breakfast baps to keep the supporters happy.  There were also hundreds of portable loos for the 6,000 competitors and not a queue in sight.  It was a cloudy but nice morning so not too hot or cold – perfect running weather.

At the start there were designated areas for predicted finishing times so I walked up hopefully to the sub 2.00 sign and tried to keep warm.  At this point I realised that they had given pink race numbers to the women and blue to the men.  Lame.  I also spotted a girl from BRAT, and for once my competitive side won out and I didn’t go and say hi.  I thought I’d stay behind and try to pass her later. There was a one mile family fun run to set off first and then our race got under way just a minute or two after 9am.  There were quite a few people out supporting at the start which was nice, but I didn’t appreciate the two hills that came right after the start.  Ok, they were more like two long ramps, but anyway.  I was hoping to run an 8.45/9 minute pace but like a total amateur I got stuck in a slower group at the beginning with no real way of getting past.  After about five minutes the road broadened so I got past and kept to my pace.  I kept BRAT girl in my sights and eventually passed her after a mile or so.  This was the first major down side of the race, the mile markers were small and only on one side so really easy to miss, my Garmin kept me up to date.  The course itself was pretty much all fields and hedges with very few spectators, which did make it a bit uneventful, even for me.  At 10k the road narrowed unexpectedly as we did a little ‘out and back’ loop, so once again I got stuck behind some slower runners.  There was also a 10k and half way time check to run through so that friends and family could keep an eye on your progress online.  My partner Rich really enjoyed this apart from the moment it said I had been disqualified!  Throughout the race there were lots of little uphills but probably even more downhills which were much appreciated, particularly towards the end of the race.  My pace started to slow and I really struggled to get it back up again, although I was still doing a better second half than I had ever done before.  At mile 11 I started to panic that I wouldn’t get my sub 2.00 PB so I started to push it.  I was cursing those slower few minutes at the start.  It felt like we weren’t getting any nearer to the town centre but eventually at about 12.5 miles we did.  Suddenly we had lots of support again and a massive hill 200m before the finish!  I almost cried.  I kept going and managed to sprint to the finish.  I got my PB but found it hard not to think about what might have been.  It was so nice seeing all the support at the end but as Chester is so small, it was hard for Rich to get a good spot.  The technical T-shirt was lovely and well worth the effort (I will pretty much do anything for a free T-shirt).  The medal was really nice too and in the goody bag we got a FULL SIZE Mars Bar, Dairy Milk and Haribo Star Mix!  Oh and a mini pack of muesli.

It was a lovely race with great facilities and support, but perhaps, dare I say it, a bit boring?!  It would have been nice to see a bit more of the town centre rather than just the last half mile of the race.  There were plenty of water stations, energy drinks and even energy bars around the course which was much appreciated.  I would definitely recommend this race if you’re a bit like me and just want to run your own race without any drama.  The winning time was 1.08 and the prize was £5000, so might be worth some of our speedier members giving it a go too.

As an aside, there is an amazing indoor skatepark called The Boneyard just 15 minutes outside of Chester if you have any kids into scooters, BMX or like me a partner in his 30s still into skateboarding!  It would be a nice reward for your supporters! 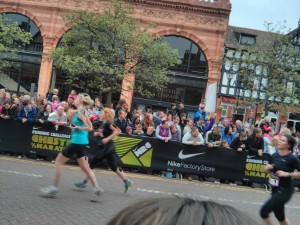 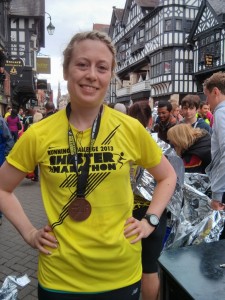