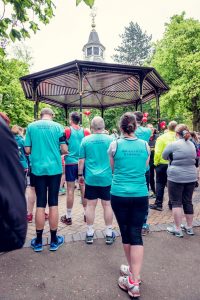 Please ensure that your parkrun details show that you are registered to Bournville Harriers if you are taking part in Saturday’s parkrun at Cannon Hill (https://support.parkrun.com/hc/en-us/articles/200499677-I-need-to-update-my-running-club). This will be the 5th annual ‘mob-match’ between Bournville Harriers and Kings Heath Running Club and will be in memory of our friend and BvH member, John Enright, and fellow parkrunner Darren Hale.

Please also bring along some cakes and some money to contribute as both clubs go head-to-head in raising funds for the British Heart Foundation, with a bake off as well as the run.

All club members can contribute towards the mob-match as the scoring takes in both performance and participation – simply ensure that your parkrun profile has your club registered as Bournville Harriers for your run to count towards the team score.

5. To ensure the event has the necessary volunteer support, each team will provide an agreed minimum number of volunteers for the mobmatch. For the 2019 match, this is a minimum of 6 volunteers from each club.
These volunteers do not have to be club members, or registered with parkrun as affiliated to the competing clubs – they just have to agree to participate in the club’s volunteering contingent.